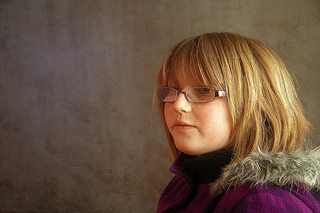 Every parent wants everything to be better for their children. This is especially true when it comes to anything concerning health. Eyeglasses have been a form of correcting vision for hundreds of years. So, the idea of wearing them is nothing new. Yet, as a parent all kinds of concerns pop into your head when you first get the news that your little one needs glasses. Maybe you flash back to the days when you had to wear glasses and remember being called “four eyes” or being labeled “the kid with the glasses.” To be fair, there are always gong to be kids who will tease other kids for being even just a little different, but wearing glasses doesn’t really have the same stigma it once had. Chances are, your kid isn’t going to get teased solely because they are wearing glasses.

Eliminating the Guilt
Now, comes the guilt. It’s just one of those things that kicks in when you become a parent. All of a sudden, anything “bad” that happens to your child is somehow your fault. Many parents feel guilty for not noticing the problem sooner, for not forcing junior to finish his carrots or for having bad genes that somehow passed your vision problems onto little Susie. Realistically, the signs of most vision issues – nearsightedness, farsightedness, astigmatism and presbyopia are the most common – are difficult to detect. Children aren’t often very vocal about vision problems. It’s usually a teacher who notices the issue first since you child is using their eyes to read the chalkboard. Most eye problems are genetic or the result of a birth defect or other circumstance that you had absolutely no control over. Realize that it’s not your fault and you have nothing to feel guilty about.

Finding the Right Eye Doctor
Your first point of reference is likely to be your pediatrician. They can probably recommend an eye doctor for the initial diagnosis. This usually involves getting your eyes dilated. Try your best to explain this process to your child or let the doctor do it if they are experienced with children. You don’t have to settle for the first eye doctor you go to. You want to make sure you find an eye doctor that you and your child are equally comfortable with. When selecting the frames, let your child have a say on as many things as possible such as the choice of color, shape, etc. Eyeglass frames today, especially those for children, come in a wide selection of funky colors and styles, some even have cartoon character logos. Maybe throw in a little reverse psychology and point out that Harry Potter wears glasses. Mentioning that Johnny Depp and Meryl Streep wear glasses probably won’t do anything but make you feel old when they say “who?”

The hardest part is the initial stage. Once you start wearing glasses, it becomes habit and you don’t even realize you’re wearing them. Explaining this to your child probably won’t have much impact, unless they’re adept at seeing the big picture, though most kids tend to focus on the here and now. Every child is different. Some may take to wearing glasses immediately, while others may fight you every step of the way. It’s all about finding a strategy that works. Consider offering a small reward as an incentive. It doesn’t have to be a trip to Disney World or anything that extravagant. Maybe something like a new book that they can now read to you. Another idea is to have a group party with their friends. Make it something fun like a pizza party or a theme party. The only rule is that your child has to wear their glasses. Odds are, their friends won’t even notice. That’s the point though. Pretty soon your child will realize that wearing glasses isn’t a big deal.

Then it’s on to the next childhood crisis.

Guest author Sara Roberts is a freelance blogger and mother of two. She is also a regular content contributor for glasses and sunglasses retailer www.justeyewear.com.

Earnest Parenting: help for parents of kids with glasses.