Whitney Farms Could Actually Make Me a Successful Gardener 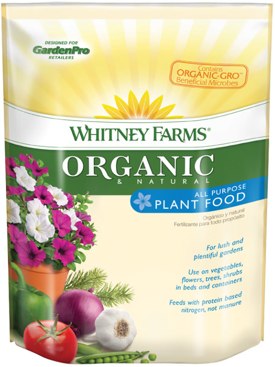 This is a Sponsored post written by me on behalf of Whitney Farms for SocialSpark. All opinions are 100% mine.

So, one of the things you gotta do when you become a parent is cultivate plants.  If you live in suburbia or beyond, then a garden is also in order.

Now, I love plants.  Especially flowers.  I have a lot of very pretty plants in my flowerbeds.

I’m not as fond of vegetable gardening.  It could have something to do with the fact that you have to start the darn thing over every year.  Then there are the yucky bugs and worms that can show up on the food.  And ugh, the weeding.  The worst part (for me at least) though, is keeping up with watering the plants.  I mean really.  By July I’m totally bored with the whole thing.

I admit it: I’m terrible.  Incorrigible, even.

I solved the problem a couple of years ago by donating the garden space to the chickens.  After all, they needed a place to stay, didn’t they???  Then last year I got the rather brilliant idea of planting pumpkins.  That actually worked!  I was able to keep up with them, there weren’t any bugs to worry about, and I actually watered enough to harvest some neat pumpkins last fall.

We won’t talk about the neighborhood ruffians who saw fit to destroy said pumpkins.  I hadn’t even gotten the seeds!  Jerks.

Anyway.  Here we are in May again, and I gotta figure out a new garden scheme.  The pumpkin thing was great, but the boys are telling me they’d rather have something else this year.

Remind me again why they get to vote when I’m the one who does all the work, won’t you?

Enter, Whitney Farms® products.  It turns out there are soils and plant foods that are 100% natural (I like that) that will help your plants grow nice and big.  I haven’t had a strictly organic garden in the past, and I probably wouldn’t be 100% perfect on that now, but I don’t like the idea of using chemicals on items my boys would eat.  Having natural products with the appropriate microbes that help the plants grow sounds like a pretty decent idea to me.  The organic plant food can help this year’s crop grow big, and maybe it’ll even survive the drought we usually have in July (ahem).  I haven’t really used much in the way of plant food in the past.  Miracle Grow on the flowers, sure.  But I haven’t been too big on using even the conventional plant foods on my garden plants.  You know…chemicals.  I’m not wildly fond.

I’m not as sure I’d use the organic soil simply because I already have the garden set up.  Sort of.  Here’s what it looks like right now. Super cool neato thing going on right now: you can get a coupon for $3 off! Just click on the Visit Sponsor’s Site button below.

I’m off to the store to get some plant food.  And possibly a shovel to get out all those weeds.