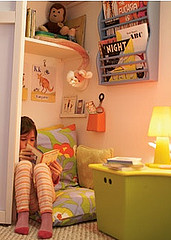 There are so many new children’s books and young adult literature coming out these days that it’s sometimes overwhelming to find quality contemporary literature for your children. There are a few awards given out every year however, that mark exemplary works in children’s literature. Here is a review of some of the award-winning works of 2012 so far.

This year’s winners of the Caldecott Medal include a charming picture book, A Ball for Daisy, by Chris Rashka (who also won the award in 2006), which won the award for best American picture book. Rashka’s work brilliantly and simply follows the highs and lows of childhood, the pain that can be so easily caused by the thoughtlessness of others, and the contentment that can be restored through their kindness, all through simple watercolors of a dog, Daisy, and her ball. Children and adults alike will be won over by Rashka’s surprising ability to describe nuances of mood through simple illustrations without any words at all.

Me … Jane, by Patrick McDonnell, is another winner of the Caldecott Medal. In Me … Jane, McDonnel illustrates the young Dr. Jane Goodall, as she dreams of life helping animals and plays with her toy chimpanzee. Everyone knows of a child who has grand aspirations and goals, and this story will certainly inspire young children to pursue their dreams of doing great things, as they see that the famous conservationist was once a dreamer just like them.

The Newberry Award and Honors, and the American Library Association Awards have also been announced for 2012. Among the many winners of the ALA Notable Children’s Book award are two that I especially enjoyed. All the Water in the World, by George Ella Lyon, is a great way to introduce younger children to the part water plays in our world – where water comes from and how and why to manage it. For older children and more advanced readers, Amelia Lost: The Life and Disappearance of Amelia Earheart, is a wonderful read for any child (and especially girls) interested in history and the life of this enigmatic, courageous adventurer.

The three books that were honored include Inside Out & Back Again, by Thanhai Lai, Dead End in Norvelt, by Jack Gantos, and Breaking Stalin’s Nose, by Eugene Yelchin. All three of the books recount the lives of children as they have been affected by recent history. Lai’s book describes the end of the Vietnam War from the perspective of a Vietnam family fleeing from Saigon in 1975, while Yelchin depicts a child’s disillusionment with communism in Stalinist Russia. Dead End in Norvel , which won the Newberry Award, also touches upon history from the perspective of a boy living in a dying New Deal town. All three of the books give children historical perspective on 20th Century events that have shaped (and will continue to shape) their 21st Century world, and also teach useful lessons in disillusionment, love, humor, and tolerance.

Earnest Parenting: help for parents who want their kids to read amazing books.