Do You Know Who Runs Your Drug Plan? 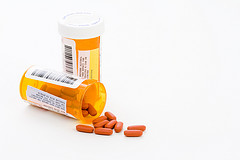 I learn something new every day. It turns out that there are companies out there called Pharmacy Benefit Managers (PBMs) who manage prescription drug plans for many US employers. Hubby’s company uses one of them. I knew about the company, but not that it was called a PBM or the role of PBMs in health insurance nowadays.

What I have noticed is that prescription drug costs can be insane. I just had to pay about $350 for a 90-day supply of something. OUCH.

The role of the PBM is ostensibly to manage the prescription drug benefit and save money. However. Because they’re not required to disclose a lot, PBMs are able to work the system to their own advantage. In fact, at least one lawsuit is pending and various settlements with state and federal governments in excess of $350 million have been made for deceptive and fraudulent practices. More ouch.

I got the opportunity to ask Dr. B. Douglas Hoey, the CEO of the National Community Pharmacists Association (NCPA) about PBMs. The NCPA has been in existence for over a hundred years (the were formerly called the National Association of Retail Druggists) and from what I can tell is a reputable organization. They’ve started a new website called WhoRunsMyDrugPlan.com with the aim of helping people protect themselves from scams.

All that to say that here is the interview with Dr. Hoey.

1. How many PBMs are there, and what are the names of some of the biggest ones?

Until this year the market had been dominated by three PBM – CVS Caremark, Express Scripts and Medco – that comprise about 80 percent of the marketplace. This spring the Federal Trade Commission approved the merger of Express Scripts and Medco that will further consolidate the outsized influence of the largest PBMs. There is a lawsuit currently pending in the U.S. District Court for the Western District of Pennsylvania that was brought by the NCPA, the National Association of Chain Drug Stores (NACDS) and several Pennsylvania independent community pharmacy owners. Outside of the big three there are currently around 60 PBMs of much smaller size and influence.

2. Are they all typically guilty of running up costs, or is it just a few bad actors?

The PBMs have reached various settlements with the federal and state governments well in excess of $350 million for deceptive and fraudulent practices mostly having to do with the prices they charge consumers and health plan sponsors. While the largest PBMs are the main culprits in these cases, smaller PBMs are not immune to running up costs in nefarious ways. However, it must be emphasized that the PBM business model is based on a minimal amount of transparency and spread pricing that allows them to claim supposed savings from their services without the type of intensive scrutiny that could see if those savings could be greater.

Ultimately, PBMs profit margins and quarterly earnings going up each year, while health care costs continue to also grow, and pharmacy profits continue to shrink. So the system as currently configured seems to benefit PBMs at the expense of everyone else.

3. Is it possible to make PBMs work in our favor, or should we start looking for other solutions to the prescription-management process?

In best case scenarios, PBMs can effectively negotiate with drug manufacturers on behalf of health plans to control the cost of prescription drugs. Too often, however, health plans and their member don’t receive the full benefit of these efforts due to PBM profiteering. By demanding reform that places an emphasis on transparency – requiring PBMs to fully and clearly disclose all direct and indirect revenue and profit streams that PBMs generate from the money health plans spend on prescriptions, this will empower health plans sponsors to make more informed decisions of how PBMs conduct their business to the health plan sponsors who purchase their services more informed decision can be made.

We have long urged PBMs to adopt transparency on a voluntary basis, but historically PBMs have resisted true transparency, instead using transparency as a marketing ploy to garner business while conducting business as usual. This has prompted NCPA to advocate legislation at the federal level such H.R. 1971/S. 1058, the Pharmacy Competition and Consumer Choice Act, which help safeguard the patient’s choice of pharmacy, bolster privacy rights and reduce wasteful pharmaceutical spending; and H.R. 4215, the Medicare Pharmacy Transparency and Fair Audit Act, which helps ensure seniors access to independent community pharmacists and to address abusive pharmacy auditing practices, while allowing legitimate anti-fraud oversight to continue.

Several states have passed bills that addressed some of the aforementioned issues. Regardless of what is done through the legislative process the best way to made PBMS work in our favor is by having health plan sponsors make more demands from the PBMs they hire.

4. Is it possible to have health insurance coverage these days without using a PBM? What does that look like?

Only about fifty-six percent all employers use third parties such PBMs to help manage their pharmacy benefit plans. Often the pharmacy benefit is managed by the medical insurance provider. Transparent PBMs that put members and their health plans first and profiteering second have the potential to help control cost. Ultimately, PBMs hove morphed from their original purpose – simple claim adjudicator in the 1980’s to giant corporate middlemen who needlessly insert themselves into every aspect of prescription drug delivery in a way that doesn’t serve the best interests of others.

Once some balance is restored by created common-sense regulations that will make their business model less predatory everyone will benefit.

5. In your experience what’s the typical response of human resources people when they see this information? Do they take steps to rein in the PBMs, or do they look the other way?

History shows that plan sponsors care about controlling cost and providing excellent patient care. To the extent that the pharmacy benefit dollars that plan sponsors ask PBMs to manage for them are devoted to these two primary goals, there is high satisfaction. Plan sponsors expect and want their PBM to make a fair and reasonable profit from helping manage their plans, but PBM profiteering and schemes to garner unreasonable and undisclosed profits leads to court actions and settlements like the type previously mentioned.

Because of the complexity of pharmacy benefit management, policing PBM business practices to insure compliance with contractual obligations can be time consuming, so some plans sponsors will simply hope for the best possible outcomes. But of course with rising health cost, this is no way to run a benefit plan.

Thank you Dr. Hoey! I hope that we’re able to find a simple fix to the problem and let everyone win.

Earnest Parenting: help for parents who want to know who runs their drug plan.