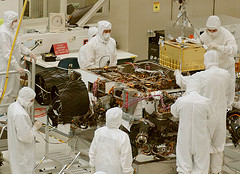 On August 6th, a robotic contraption – about the size of a Mini Cooper – landed on the surface of another world after an eight month trip and a mind-blowing maneuver that brought it gently to the dusty ground.

That same day, headlines on our own world were filled with the story of a Hollywood starlet who cheated on her boyfriend, and rumors about who might be the new Bachelor on television. One major online news site placed the Mars landing of the rover named Curiosity in 6th position on its “top stories” page.

The truth is, we have become numb to extraordinary achievements that just a few short years ago would have flabbergasted us. Instead, we wait breathlessly for the next mindless update that we can post or re-tweet.

When Neil Armstrong kicked up the first cloud of moon dust back in 1969, the entire world was mesmerized. People stopped whatever they were doing and stayed glued to their televisions for hours, absorbing the spectacle of man’s greatest technological achievement. Within a few years the interest waned, to the point that phenomenal feats of science and engineering are today relegated to a brief mention at the end of a newscast…if that.

So what? you ask. And, as warped as this may sound, I suppose it’s actually somewhat of a tribute to the space industry’s incredible abilities that we expect them to do astounding things. But if I had to pinpoint a reason why I’m concerned about this apathy toward great scientific accomplishments, it’s this: When we fail to acknowledge great achievements, we essentially remove them from the national consciousness. And, when that happens, we inspire fewer and fewer young people to follow in those footsteps. If they never hear about it, kids can never dream to pursue those fields and – even worse – they’re less likely to ever improve upon those accomplishments.

Today’s astronauts grew up in the afterglow of the Apollo successes, and with their love of science and learning they were practically caught up in the whirlpool of admiration for the early pioneers. Sadly, how many of today’s young whiz kids are even aware of what’s going on above the clouds?

As with many things in our daily lives, it’s a matter of priorities. We apparently can’t be fed enough scandalous information about an adulterous sports champion, but when a team of men and women place a roving laboratory on a planet tens of millions of miles away, few people notice. I watched everything I could about this astonishing new technological achievement, and at times could hardly believe my eyes. Unfortunately my eyes didn’t have a lot of company.

I challenge every adult who has an interest in these and other great scientific achievements to take just a little bit of time and expose a young person to the wonders that they’re missing. Express your own enthusiasm, and impress upon them just how much effort and determination it takes to achieve these miracles. Scan the science channels for the well-produced programs that trumpet the successes of our human spirit. Talk about it with your kids. Let them ask questions, and, if you don’t know the answer, go learn about it together with one or two clicks of your mouse. It will take mere minutes out of your day.

While we might have allowed ourselves to grow numb to great accomplishments over the years, it doesn’t mean that we can’t correct our course. I look forward to the day when millions of young adults are again glued to their monitors and gasping at the real heroes of our time.

Dom Testa is an author, speaker, morning radio show host, and has kept a ficus tree alive for twenty one years. He’s also the founder and president of The Big Brain Club, a non-profit foundation that helps young people recognize that Smart Is Cool. More info at DomTesta.com.