What’s the Big Deal About Immunizations? 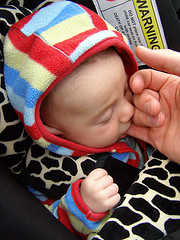 (Editor’s note: the views in this article are those of the individual author, and not necessarily of Earnest Parenting. This is not to detract in any way from Amy’s excellent article, but an acknowledgement that thoughtful people disagree on some of her points.)

Vaccines have been a net good for society since they came onto the scene in 1796, but in recent times they’ve been at the center of a lot of controversy. Some groups claim that vaccines are the cause of numerous cases of autism and other developmental problems in young children, but while there is little to no evidence to support that, vaccines have been known to contain some problematic ingredients. The answer to the vaccine question is not a clear yes or no, and there are a few things parents should inform themselves of before making their choice.

The Real Risk of Vaccinations

The claims that autism is in any way linked to mercury in vaccines are 100 percent bogus. It’s a case of grieving parents and opportunists pinning the blame on something without any evidence because people are desperate for answers. Medical professionals don’t know what causes autism, and it’s going to take a lot of scientific study to solve that mystery. For the time being, such claims only take the focus off of the legitimate risks that accompany vaccinations.

The exact side effects depend on the vaccination that’s administered, but some of the common symptoms would be fevers, headaches, tenderness, muscle soreness and other relatively minor symptoms that make life unpleasant but not unbearable. In other cases, the symptoms can be debilitating or life threatening. Such reactions are incredibly rare, but to those who become one of those statistics, the odds make little difference.

Are Vaccines Worth the Risk?

The first question that people should ask before deciding whether to have their kids immunized is whether the potential risk posed by the disease in question is worse than the risk posed by its vaccine. In most cases, the vaccine is the better choice, but there are exceptions.

Kids who go to public schools need to get a certain number of vaccinations regardless. The reason is that schools want to promote herd immunity. The fewer students who can be infected by a disease, the harder it is for it to spread to anyone who isn’t immune. It’s also a case where the state is trying to ensure the welfare of students; someone who contracts a disease that he could have been vaccinated against may miss a huge chunk of the school year, and he may also experience severe complications that could cripple him for the rest of his life.

Treating such diseases is also extremely costly. Insurance companies won’t always comply with paying for the treatments that a child needs when immunization was a possibility. If doctors can do anything to treat an illness or make a child more comfortable, it may involve rare treatments or medicines that are made more costly by the fact that they’re rarely employed. Preventative care is not only the better option for the child’s sake, it may be easier for the family as a whole.

Is Age a Factor?

Most children begin their immunizations in their infancy and they finish shortly into their second year. However, just because that’s the standard, it doesn’t mean that it’s the best choice for every child. Infants develop at different rates, and the human immune system is not an exception; children with stronger immune systems face few risks from vaccines whereas those with weak immune systems almost always run into problems.

Doctors are primarily responsible for monitoring an infant’s health, but parents need to be on the ball, too. Wellness checkups are usually a big part of an infant’s early life, and it’s vitally important that parents schedule as many exams as necessary to keep close tabs on their child’s health. If their doctor can’t answer certain key question or complications arise that could have been prevented, parents should seek a new physician immediately. Parents may even consider doing their own research and using credible online sources such as www.healthtestingcenters.com.

Vaccines are one of the most important advancements that mankind has ever made. Even with the questionable ingredients that some vaccines currently contain, they are a far better alternative to suffering through severe and potentially life-threatening illnesses. While it is an unfortunate truth that some children suffer as a result of receiving vaccines, most only benefit for it. Even so, it’s vitally important that parents look at the actual risks of certain vaccines instead of buying into anti-vaccination fearmongering. It’s a decision that can’t be made lightly; facts are the only thing that matters when it comes to questions of life and death.

Earnest Parenting: help for parents who are considering immunizations.