Boys and Books: We Need to Reconnect Them 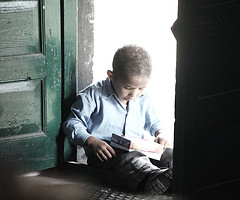 Over the past decade there’s been a growing number of people who have pointed out the disparity between girls and boys when it comes to reading. Why aren’t more boys picking up books?

Based on observation alone, I’m confident that one of the culprits has to do with image. Let me give you a few examples.

A teacher at an elementary school invited me to speak to her students. I looked at the school’s web site and saw that, between administration and faculty, there were forty-two people employed there.

I was asked to speak at a teen literature conference, where the focus was on “getting kids interested in reading.” The conference committee was made up of sixteen people.

None of whom was male.

I did an informal scan of the hundreds of faces filling the auditorium on the morning of the event. No, it’s not scientific, but I specifically looked for men in the room full of teachers and librarians.

Of the four-hundred-plus people in the room, I estimated about ten percent were men.

Oh, and my panel discussion? I was the lone male author, along with four women.

As a nation we’re desperate to “fix” education. Test scores, including reading and literacy rates, are pathetically low. A growing number of initiatives aim to generate enthusiasm for reading among students. While my education foundation works with both boys and girls, I can tell you right now why the task is more difficult when dealing with boys.

Too many of them think reading is a “chick thing.” And, based on the examples I listed above, why wouldn’t they?

For the majority of young boys, their first exposure to books came from a parent reading to them, and it was likely their mother. One study indicated that as few as ten percent of fathers read to their sons.

In elementary school, where reading is initially taught, the statistics are glaring. Some studies claim that, at most, sixteen percent of teachers are male, while others say the number is much lower, perhaps only nine percent. And the reasons for this can often be disturbing. Some male teachers claim they’re worried about the perception of being a predator. How sad for all of us.

Everywhere boys look, books are associated almost exclusively with women. My publisher lined up a blog tour to promote my action/adventure series of books. It encompassed forty blogs in a forty day stretch – each devoted to books – where readers could scan excerpts from the series and sign up to win a complete set of the Galahad books.

Thirty-eight of the forty book blogs are run by women. The remaining two share the duties between men and women.

Don’t misunderstand me, I’m thankful for the passion that so many women bring to the world of books and literacy. But it’s pretty clear that boys – who are extremely sensitive to image and peer pressure – have few, if any, male role models when it comes to reading. In the case of minorities, the numbers are downright alarming.

I salute the fathers who read to their sons. I celebrate the men who choose to work in elementary and middle schools, and I’m thankful for the adult males who openly promote the value of literacy to any young man in their sphere. But there aren’t enough of these men shouldering the load.

Undoubtedly the cycle repeats; boys, perhaps subconsciously convinced that reading is a “girl” activity, fall further behind in reading interest and ability, thereby becoming unable to provide mentorship to succeeding generations of boys. Breaking the cycle requires adult men to become an active influence, today. That means reading, encouraging their sons to read, and celebrating the power of books, regardless of the genre.

It requires, too, that society not stigmatize male teachers in elementary and middle school, driving qualified – and passionate – educators out of the field because of a fear of “inappropriate behavior.” We need all of the strong, masculine role models we can find – of all ethnicities – to once again encourage boys to immerse themselves in books.

It’s not a chick thing; it’s an enlightened thing.

Dom Testa is an author, speaker, morning radio show host, and has kept a ficus tree alive for twenty one years. He’s also the founder and president of The Big Brain Club, a non-profit foundation that helps young people recognize that Smart Is Cool. More info at DomTesta.com.

Earnest Parenting: help for parents who want their boys to read.