The Gift of Boredom 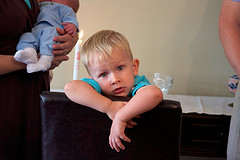 Some friends of mine stopped by the house, and we sat in my living room for about fifteen minutes, chatting. They had their seven year old with them, a little boy who once would have been described as “precocious.”

While the adults caught up, the son sat on the couch, kicking his feet and staring at the alien living space around him. Then he turned to his mother and said, in a loud, plaintive wail: “Mom, I’m bored!”

He had been in my house for less than three minutes.

I’ll grant you that my home is no playground; I’m a single guy who doesn’t even own a Wii or PlayStation. But this cry of despair from an elementary-aged student reinforced the notion that we’ve officially created generations of young people who must – at all times – be stimulated. Without a continuous input of audio/visual signals, they reach a stage of distress that borders on panic.

This isn’t another “oh, these kids these days” rant. Instead, it’s a rational exploration of the process that leads to growth and creativity.

Science has attempted to pinpoint the exact location in our brain where the creative process begins (with no definitive results), and researchers have studied artists from many fields, hoping to identify the ingredients that make up imaginative thinking.

I can’t tell you where I get my creative bursts, nor can I describe how I go from idea to finished 70,000 word manuscript. But I do know that my childhood included long, empty stretches with no digital input. In other words, I was bored.

A few years ago a writer named Peter Bregman suggested in the Harvard Business Review that there might be a connection between boredom and the creative process. As he put it, boredom allows our minds “to wander, looking for something exciting, something interesting to land on. And that’s where creativity arises.”

I think he’s right. In order to access a pure, blank slate in your mind, it’s important to flush out the non-stop digital noise that occupies our heads for the majority of our days. When I address assemblies of students, and inevitably get the standard question about where I get my ideas, I’m quick to encourage the students to unplug in order to tap into their own creative spark.

When we keep earbuds lodged in our heads for hours at a time, or when we keep our eyes glued to the phone or electronic tablet, we’re essentially swimming in a world of someone else’s ideas. What concerns me the most is the notion that millions upon millions of young minds are not only losing touch with the concept of boredom, but they’re quickly becoming intolerant of the idea. No seven year old should freak out when they go three minutes without stimulation.

In order to develop a healthy imagination, it’s crucial that we shut down the digital babysitters in our lives – and you know what those are. An hour a day of inventive playtime is healthy for everyone, kids and adults alike. I allow myself certain windows of electronic playtime, and then escape to find my creative/zen place.

As parents, the best way we can stimulate the inventive/creative processes in our kids is not to sign them up for Creativity Classes, or something of that sort; it’s to kick them outside – without their phones – and introduce them to the world of imagination.

Once they’re truly bored, their minds will fill in the gaps. Who knows what delights will result?

Earnest Parenting: help for parents who want to have bored children.