Escape With a Little Humor 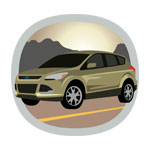 I don’t usually associate car companies with humor. Just sayin’. That didn’t stop the good people at Ford from making a new video series though. That’s a good thing, because the two I’ve seen cracked me up! One also got 2 thumbs up from the younger boys (the older ones weren’t here to vote, so I’ll have to ask them later.) One of the stars in the series is the Ford Escape, a vehicle I am seriously thinking about. Our poor van is over 14 years old. We said we’d drive it into the ground, and I think it’s safe to say we’re about there. Poor thing. The speedometer is off by several miles per hour, the horn doesn’t work, the cruise control won’t turn on, and the air bag may or may not deploy. We’re hoping it’ll survive for just a few more months and then we can get a replacement. Poor van. It’s been a faithful helper for a long time.

Given that we haven’t been in the market for a vehicle for 14+ years, the new technologies positively make my head spin. Tailgates that open when you swipe your foot under the bumper, seats that fold down out of view, internal entertainment, heating/cooling vents in the whole vehicle…we’re going to be in the lap of luxury! And increased gas mileage. Wow. I’m looking forward to that.

I’ll let you know what we choose when we’ve figured it out. In the meantime, enjoy the video series! I can’t wait to see what happens with Barry and Skyler. Inquiring minds want to know!

This post brought to you by the Ford Escape.