Building a Better Student: The End of the Slinky 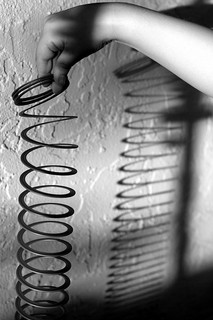 A recent episode of Radiolab (presented by WNYC Radio and NPR) explored an intriguing concept in physics that, oddly enough, might help your kids to better understand the consequences of their actions.

Scientists call it ‘locality,’ and a fun demonstration of the effect involves a popular children’s toy. A Slinky is held out at arm’s length and allowed to dangle, stretching out toward the ground. Once the Slinky is at equilibrium and still, the hand holding the top end releases the metal toy.

Author and Cornell mathematician Steve Strogatz asked the hosts of the show, “What do you think happens to the Slinky?”

Most of us expect it to drop immediately to the ground. And that’s what happens . . . sorta.

It turns out that the portion held in the hand does, indeed, begin its plummet downward. But the bottom end of the Slinky, the part dangling just above the floor, for a brief moment doesn’t go anywhere. It remains exactly where it is, hovering in mid-air, as if by magic.

When you see the experiment in slow motion you’re left to wonder: Why wouldn’t all of the Slinky immediately start to drop? Does gravity somehow ignore that end of the coil?

This is where locality comes into play. Essentially the bottom of the toy isn’t aware of what happened up at the top; it doesn’t know that the hand has let go. Although the pause is very brief, it’s also very real. There’s a delayed reaction, and during that time the end defies conventional wisdom.

I thought about this during one of my long walks in the park, and it dawned on me that our metallic friend, the Slinky, provides an interesting analogy that I can use within my school presentations – and one that you can incorporate during a talk with your kids: The idea of consequences.

As we grow and (hopefully) mature, we realize that consequences often are not immediate. That doesn’t mean they’re not coming; we just don’t see them right away. It’s why some people keep smoking. If you keeled over and died upon lighting up your first cigarette, no one would ever do it. But the grisly consequences of the behavior are merely delayed. Cancer is, to be blunt, at the top of the Slinky, and takes a while to reach the bottom.

Young people are vulnerable to the Slinky effect. When they blow off their education and make poor choices regarding their academic efforts, they’re unable to see the effects right away. They’re nestled comfortably within the bottom end of the Slinky, hovering in mid-air, completely unaware of the crushing mass of real life that inevitably will come collapsing down upon them.

They’re likely not aware of the gravitational effects of their decisions – and that brief lull between action and reaction can be intoxicating in its naiveté. That’s why one of the most powerful responsibilities we have with our kids is to make them aware of the inescapable outcome of choices, the inevitable catching up of consequences. Not just with drugs or alcohol, but with their education.

Consequences may be delayed, but they do eventually arrive. As Strogatz told the hosts of Radiolab, “You’re always the bottom of the Slinky.”