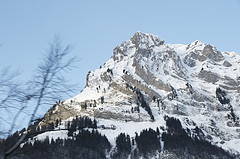 A co-worker of mine was voted “Class Clown” by her high school peers many years ago. One of my good friends scored the “Best Hair” award, and a caller to our radio show told us that she was selected “Most Likely to Run Over a Pedestrian.” (For the record, she claims that in almost twenty years it hasn’t happened. Yet.)

I left high school with an award, too. I was voted “Runner-Up Friendliest Boy.” That’s right, runner-up. I suppose it’s like second place in the Miss America pageant; if the friendliest guy in school was somehow unable to fulfill his duties . . .

While I’ve always chuckled over this dubious achievement, my friend had a different take on it. “Hey,” she said, “the good news is that you didn’t peak in high school.”

The more I’ve thought about her analysis, the more I’ve realized how important that distinction really is. Most of us can think of people who peaked during high school, and ever since have been coasting on past accomplishments . . . and it’s kinda sad, right?

When it comes to student development, it’s important to instill a forward-thinking mindset, one that recognizes that high school graduation isn’t a finish line, but rather a checkpoint. As parents, teachers, or mentors, we’re tasked with a variety of responsibilities, one of which is to help young people generate a pattern of steady improvement.

The idea is to continually push the finish line farther out, even while rewarding achievements along the way. Runners know what I’m talking about; as soon as we set a personal best time in a 10k race we celebrate, and then immediately think about how to shave off another five seconds. It’s not obsessive behavior; it’s striving to improve.

For students, an important part of their growth lies in learning how to learn, which ultimately prepares them for a lifetime of continued learning. Of the people I know who peaked in high school, most of them – if not all – placed a priority on physical or social achievement. Few of them focused on the intellectual side of the ledger. It’s possible that they never really learned how to keep learning.

It’s not just about setting goals. Goals can be tricky, especially with teenagers, which is why I’m a proponent of both short-term and long-term targets. Sometimes having goals that are too defined makes it easy to brush your hands together and declare the journey over, while there’s so much more to discover.

I like the combination of literal and figurative scaling that comes with mountain climbing. Here in Colorado we have over fifty peaks that reach more than 14,000 feet into the sky. We lovingly refer to them as 14ers. On my first attempt to summit these monsters, a friend and I set an aggressive goal: we planned to knock out four of them in one day. We reached the top of Mt. Lincoln, Mt. Cameron, and then Mt. Bross before deteriorating weather forced us down, ending our day.

I must’ve looked over my shoulder at the unconquered Mt. Democrat four or five times on my way down the trail. It has beckoned me ever since, and this next summer I’ll check it off my list.

Some people would be thrilled to have climbed three 14ers in one day. I’m wired to celebrate those achievements, however, while staring down the next challenge. I have no interest in peaking; to me it’s a signal that you’re ready to check out.

And this is especially true when it comes to learning. For students, success inevitably is tied to their desire for continuous knowledge and persistent growth. Yes, a high school diploma is great, and a college degree is a terrific accomplishment. But the person who is still “getting educated” at forty – and fifty and sixty – is, in the long run, the real winner.

Take it from the Friendliest Boy. Well, runner-up (thank goodness).

Earnest Parenting: help for parents who want their kids to aim high.