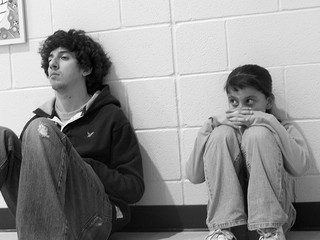 “One of the reasons people stop learning is that they become less and less willing to risk failure.” – John W. Gardner, former Secretary of Health, Education, and Welfare.

It’s easy to associate Gardner’s observation with adults. When we see the phrase “stop learning,” we tend to imagine someone who has already graduated and perhaps is slowly settling into a life of routine and boredom.

No doubt that’s true for many older Americans, but in my work with students I see it, too. Fear of failure – or, in many cases, fear of ridicule – often keeps a young person from taking the necessary chances in order to become the best version of themselves.

It manifests in many ways. Sometimes it’s as simple as a student refusing to raise his hand in class for fear of giving a wrong answer and inciting laughter from his peers; another student might worry over setting too high the proverbial bar, therefore obligating her to match or surpass the effort down the road.

In almost all of the cases, however, it’s a matter of confidence, and, ultimately, personality. Psychologists refer to it as Self-Handicapping, a type of avoidance behavior, and although they see it primarily in the business world, it unfortunately pops up in students, as well. They’ll refrain from sticking their necks out, preferring to lay low and hide within the anonymity of mediocrity.

This isn’t to suggest that shy individuals perform at a lower level than Type A folks. In fact, some studies indicate the reverse to be true. But there are too many kids who fall somewhere in the middle, where a nudge one way or another can have a cascading effect.

In our efforts to build a better student, it’s important to recognize that fear of failure is a powerful element within education. Teachers are well aware of it, and often develop plans to encourage participation. As parents, awareness is key; understanding how much influence a young person’s peer group plays can help us prepare students before they reach the classroom.

The answer lies in creating trust on two levels. First, it’s important to develop a child’s trust in education in general. If that sounds funny to you, consider that many students have never quite connected the dots when it comes to why they’re in school. Sure, they know they’re supposed to go . . . but they’re sometimes a bit foggy on the notion of actually preparing for their future. Visualizing that future requires reinforcement from parents.

The second level involves trust in themselves, in their ability to set a high goal and then achieve it. Michelangelo, the magnificent Italian Renaissance artist, said that our greatest danger was not in aiming high and missing, but rather in aiming  low and reaching it. One of the most rewarding gifts a parent can pass along to their child is instilling a commitment to excellence, which helps to build trust in their own abilities.

If a student understands the connection between risk-taking and success, they’ll be more likely to apply that approach to their education, and more apt to push themselves to try harder. By mitigating their fear of failure, we help young people to better prepare for a future that rewards high achievers, and, in the process, help them in so many other areas of their lives, as well.

Earnest Parenting: help for parents who want their children to overcome fear.