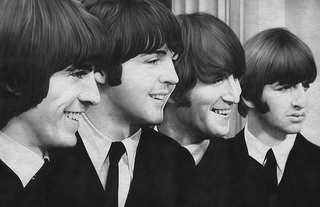 My father was a career military man who lived and preached discipline. It’s tough when you’re a kid – especially when your friends are running around wild – but you really appreciate it once you become an adult.

One of the most important lessons I learned from my dad didn’t sink in until many years later, and it revolved around – of all things – the Beatles.

I was just a little tyke when the British band was dominating the world, but my older sister was in the prime Beatlemania demographic. She had all the records, kept posters on her wall, and was convinced she would grow up to marry George Harrison. I became a big fan of the band through osmosis.

I remember how frustrated I was throughout my teenage years because my father, whom I respected so much, never had one kind word to say about the Beatles. On one level I understood it, because he was the crew-cut-wearing first sergeant while they were the long-haired rock stars playing loud music.

But as time went on I realized that his disdain was based entirely upon their lifestyle choices. My dad couldn’t even hear their music when he was so focused on the fact that they were heavily involved with drugs. In his eyes, they weren’t the kind of people that his son should be idolizing. He was – quite understandably – concerned that I would base my own lifestyle decisions on those of the celebrities I followed.

I found myself defending the band members by pointing out their remarkable writing skills and their landmark advances in recording techniques. Without knowing it, I was beginning the process of separating talent from behavior.

While our kids are still very young, we are their heroes. But they reach a stage where the sparkly outside world catches their eye and then their imagination. They develop a fascination with rock stars, Hollywood performers, professional athletes, and other pop culture icons. And, more today than ever, the personal lives of these stars are documented in detail, with every poor choice splashed across the internet at light speed, and every questionable activity glamorized.

When you’re a child it’s difficult to separate the talent from the behavior; in some cases you perhaps can’t even distinguish between the two. My father, through his gruff dismissal of the most popular rock band of all time, taught me to differentiate between a person’s talent and their lifestyle choices.

Your kids are no different from the kids of the 60s; instead of the Beatles it’s Justin Bieber; instead of Bart Starr it’s Tom Brady. Technology has provided an explosion of access to celebrities, but the hero-worship is much the same.

One athlete in particular has received an enormous amount of media coverage in the past few weeks because of lifestyle choices that have tainted his professional achievements. As disappointing as the results may be, the story does provide an opportunity for parents to discuss the importance of separating talent from personal behavior.

It’s a crucial distinction for young people to recognize. Artists and athletes invest countless hours in preparation, devoting years to honing their craft and becoming the very best they can be. Those are the traits that we can – and should – honor and celebrate, because they’re qualities that translate into success, regardless of the path a young person chooses.

The Beatles were an inspiration to me professionally, but not personally. They instilled in me a love of music which is responsible for a career in radio that now has lasted more than thirty years. And yet I’ve never had any interest in drugs whatsoever.

Somewhere up there, a certain first sergeant is satisfied with a job well done.

Earnest Parenting: help for parents who want their kids to scrutinize idols carefully.