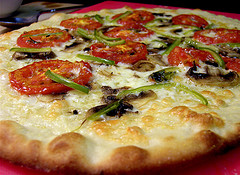 Some co-workers and I tried an odd experiment about a year ago. After hearing a friend gush over a delicious meal by saying “I could live on this alone,” I suggested a few of us try to do just that.

We each selected one particular food, and vowed to eat nothing else for an entire week. Breakfast, lunch, dinner, snacks – that one food only, with no cheating. I chose homemade pizza, and for a week I subsisted on nothing else.

Here’s what I discovered: it’s not that you get sick of that food – pizza, after all, is the eighth wonder of the world. No, the problem is that you find out how much you miss all of the other options. We take for granted the fact that we have choices; take those away, and we soon realize how spoiled we are.

Lying awake one night during that week – probably longing for a bowl of pasta, or some chicken, or just a cookie – it occurred to me that this is exactly what happens when a student blows off his education. Instead of a world of choices, his options shrivel.

Think about it: if a young person succeeds academically, she has almost limitless choices in her life. Colleges and careers open up, and she can use her strong academic background to sample a variety of options. It almost doesn’t matter what field she wants to try, because she’s given herself a solid foundation from which to build.

If, however, she ignores her education, if she chooses instead to barely scrape by, if she allows others to pressure her into skipping school or even into dropping out . . .

Through my work with students over the last twenty years I’ve found that visualization is a powerful motivator. Suppose they imagined a ten-screen movie complex near their home that showed the same movie on every screen, forever. Or what if they had ten shirts in their closet, but all ten were identical? Or consider an iTunes library with one song, listed over and over again.

Sound ridiculous? Well, that’s essentially what happens when a student emotionally checks out of school.

Our task, as parents and educators, is to help young people visualize that future. No, a seventh grader shouldn’t have to worry about a career choice or what college major he should pursue. But he can be taught to recognize the value of having choices, and how his attitude and approach to education today can critically impact the number of options he’ll have in just a few years.

I grew up having three television channels from which to choose, but today’s student has never known a world without hundreds of TV choices, along with a mind-boggling amount of online content. They’re likely to grasp the concept of choice, because they’re practically swimming in it now. What if it suddenly vanished?

It’s not until you try eating nothing but pizza for a week that you realize how much we take our options for granted. For young people, I want their toppings – and the rest of their life choices – to be limitless. By embracing their education, they’ll make that possible.