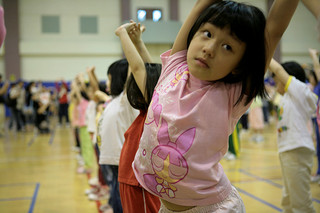 For years we’ve been told that the best thing we could do for our kids before sending them off to school was to feed them breakfast. Breakfast, it was said, boosted their brain function and gave them a running start in their education.

Now it looks as if we should’ve taken the running start idea literally.

In an article published in The Atlantic Cities, Sarah Goodyear references a Danish study that suggests morning exercise is actually a better indicator of a student’s level of concentration. In other words, oatmeal is good, but walking or biking to school is better.

Curious, I dug up the original report, published in November of 2012. The researchers studied almost twenty thousand students between the ages of five and nineteen – essentially kindergarten through early college – and discovered that how a child got to school played a significant role in their powers of concentration. Those who biked or walked performed better on tests than those who either rode in a car or used public transportation.

Niels Egelund, one of the report’s authors, said the results were surprising – especially since their original goal was to study the effects of breakfast on student achievement. What they discovered, however, was a completely different factor. “As a third-grade pupil,” Egelund said, “if you exercise and bike to school, your ability to concentrate increases to the equivalent of someone half a year further in their studies.”

For years I’ve worked with young people to shift their attitudes toward education, helping them to embrace their academic studies in order to create a better version of themselves. For the past few decades those attitudes have deteriorated, to the point where millions of students blow off their education. There are many reasons why this has happened, in my opinion, but the Danish report suggests another possibility.

Scientists have often pointed out the connection between exercise and attitude; if you’re in a bad mood, they say, get outside and exercise. The endorphins released into your blood can work to boost your spirits.

Now we find that students who exercise in the morning perform better, and that their levels of concentration remain elevated for up to four hours – practically half the school day. My son worked for several years with the U.S. Olympic Swim Team, and he often told me academic success stories of high school swimmers. When you consider that many of these young women and men are in the pool for an hour or more before school, suddenly the correlation between exercise and classroom concentration seems even stronger.

Could it be that a decline in student attitude is related to their lack of concentration? As Goodyear points out in her article, forty years ago half of students in America walked or biked to school; today almost nine in ten are riding in a car or bus. I’m sure there are many instances where it’s necessary to ride, but at the same time it provides us with something new to think about when it comes to improving classroom results.

For that matter, it’s yet another reason why eliminating recess at schools is a terrible idea. Perhaps instead it should be the first class of the day.

I’ve long advocated for starting school later in the morning – to me, the studies on how teenage brains perform early in the day are compelling evidence on that score. Most of us also recognize the importance of fueling that brain in the morning with a healthy breakfast.

But the time has come to consider a new component in building a better student: exercise before class. Not only will it improve a child’s physical health, it might just be one of the missing ingredients in shaping a positive attitude toward education, too.

Earnest Parenting: help for parents who want their kids to concentrate.