A World of Tens 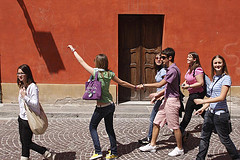 One of the challenges of teaching and parenting is dealing with young people who haven’t yet learned the concept of degrees. Everything that happens to a pre-teen or teenager is either the best thing that’s ever happened, or the end of the world.

If you’re snickering over that observation, it’s likely because you have a lot of drama in your home right now, or you can remember your own teenage journey through Extreme World. Or both.

To be fair, it’s difficult for a thirteen-year-old to put things in perspective because they don’t have much perspective in the tank. When they go to a concert, by default it must be the greatest concert of all time and dimension. You and I have been to a lot of shows; we can contrast and compare.

Likewise, when a friend does them dirt, that person is suddenly Satan. Kids don’t realize that hundreds – or thousands – of people, both good and bad, eventually will roll through their lives. At forty we’re able to shrug off personal offenses that at fourteen made us almost tearful.

It’s frustrating for parents because we’re seeing through seasoned eyes while our children are tromping through virgin snow. When they collapse onto the floor in a spasm because they can’t find that one particular shirt, you might look at them like they’re some newly-discovered alien life form. “Just pick a different shirt,” you say. But at one point you were the one whose wardrobe-world was falling apart.

A middle school administrator once told me that, on a scale of one to ten, everything in a young person’s world is a ten. There are no degrees of good and bad. Granted, there are some adults who never grow out of this phase, but, fortunately, most of us learn.

This same lack of perspective plays a role in a student’s academic performance. A friend of mine has a teenager who decided back in elementary school – after a couple of tough early experiences – that she “wasn’t smart.” For the next several years she went to school with the mindset that it wasn’t her domain. Her initial reaction, based on a sample size that was entirely too small to be of value, essentially held her back for years. Today she’s working to adjust that attitude.

It’s not unusual for a young person to rush to judgment based on early outcomes. It’s because they measure everything in extremes; if they succeed, they’ll ride the wave of resulting confidence. If they fail, they sink.

Kids don’t have the gift of experience that we have as adults. The first step in helping our students through some of their early trials is to remain patient, and to remember that we were the same way.

The next step is to teach them the concept of degrees. Explain the idea of a true sliding scale, and encourage them to recognize what a two might look like compared to a six, an eight, or their favorite default: the ten. Although they may not have much history to go by, look for multiple examples from their own life.

And when it comes to education, gently demonstrate just how far they have to go, and how swiftly averages can climb. Baseball players might start the season oh-for-four, but with three hits the next day be a .375 hitter.

It doesn’t help that pop culture also paints everything as a ten, but our job as parents and teachers is to help smooth out the ride for the young people in our lives. A world of tens is too dramatic – and simply too draining.