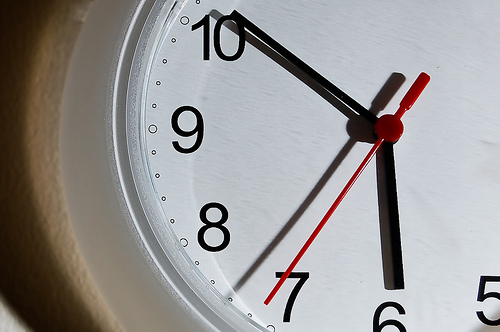 There’s a funny little saying that circulates in the world of professional writers: We love the finished product, but we’re not too fond of the actual process.

It’s true. There are few experiences in life more thrilling than wrapping up an 80,000 word manuscript and sending the final draft to your agent and editor. But while we celebrate the finish line, the actual race itself can be tedious and aggravating.

That’s why I work better with a deadline. If you ask me to produce a short story, and tell me to get it to you whenever it’s ready, I’ll eventually get it done. But my mind jumps from one project to another, my attention drifts, and the word count climbs very slowly.

Give me a time frame to get it finished, however, and two things happen: I meet that deadline, and the work is better.

This is a lesson that people of many professions learn when under the gun, and it certainly applies to young people and their school work, too. Deadlines equal superior effort, and often superior results.

I was talking with a former teacher about this a while back, and a few weeks later saw an article in Wired Magazine by Adam Savage (one of the MythBusters). He suggested that deadlines help him with his problem-solving.

He’s right, and I’ll take it a step further. When you give yourself – or your students – a deadline, you’re eliminating outside noise. For me, it funnels all of my abilities into the work at hand, forcing me to place those other writing projects on the shelf and devote all of my brain to the task at hand. I use more of my resources, rather than keeping some in reserve.

The final product is always better when I’m working at a good pace with a looming deadline. When I stroll through the work, it sags. That’s because with no finish line in sight I’m nowhere near as vigilant with the quality. There’s always time to “fix that later.” Then later never comes. Too many distractions.

Students today have more potential distractions than we could even have dreamed about a few years ago. When you ask a teenager to complete a project, there’s a good chance that her brain will make several stops along the way. Sure, sometimes those stops allow her to apply critical thinking that otherwise would’ve gone missing – but that’s the exception, not the rule.

No, without a deadline, it’s too easy to assign only part of the brain to the job, while the rest of the mind wanders. And why not? There’s no rush! It’ll get it done eventually!

Some of the greatest writers in the world will testify that, if it weren’t for deadlines, half of their work would never get done, and the half that did would be inferior. I’ll bet if you stepped back and looked at your own life – regardless of your career – you’d probably see the same thing.

Over the next week, consider adding deadlines to your child’s (or your student’s) world. And stick to them. Then watch the diligence that suddenly blossoms; notice the extra attention that is given to his work, as well as the marshaling of skills and experience that might otherwise have remained untapped.

Encourage that young person to institute his own deadlines going forward. Make it a learned behavior until it becomes a habit. Besides easing the anxiety of future deadlines, it will rev up his creative engine and produce better results. That, in turn, will build confidence, which leads to even better work later.

So make time for that talk soon. In fact, give yourself a deadline.

Earnest Parenting: help for parents who use deadlines.