We Can Turn the #BostonMarathon Tragedy into #Triumph 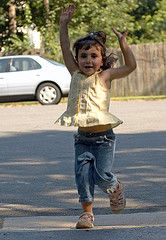 Similar to most people, my heart is broken and my deepest condolences go out to those who lost life and limb yesterday at the Boston Marathon. The full weight of the horror of those minutes is certainly something I cannot understand because I have not experienced it. But I do know that it was-and is-awful. I’m so sorry.

Again, similar to so many parents, I had conversations with my boys yesterday about the event.

One conversation in particular late last evening has stuck with me. Bothered me even.

I warned all of the boys that the images on TV might be strong. And I told the older ones to be cautious looking on Facebook and Twitter, because I’d already heard that the photos being shared were super graphic. Sure enough, The Mercenary reported later that he’d seen some and they were indeed very detailed.

If I were one of the injured…

Here’s the thing though. If I were one of the people who was hurt yesterday, I’d be even further hurt by the knowledge that millions of images of one of my worst moments were floating around the Internet. Out of my control.

For one thing, that one moment doesn’t define a person. Each one of the individuals who was hurt yesterday is so much more than that injury-great or small. You can’t know them personally by looking at that one moment in their life, any more than you can know any individual just by seeing them in one image.

When I told him that I wouldn’t want my picture out there like that, my son was completely confused. Most likely, this is a generational difference and I am firmly placing myself on the side of the aged. So be it. With the proliferation of cameras everywhere, it’s not shocking that hundreds or even thousands of people possess images of the bombing and immediate aftermath.

That doesn’t mean we need to share them ad nauseum.

My son said that one picture he’d seen already had 2000 comments on it with people expressing their thoughts, feelings, and sympathies. Certainly, we all need a way to express our feelings. We need to each work through our own personal trauma over the event. But do we really need to do it so publicly?

Aren’t we rewarding the bad guys?

This brings me to my second concern. With so much publicity, aren’t we rewarding the evildoer(s) who perpetrated this deed? Bad guys have Internet too, and I’m willing to bet that there are more than a few individuals out there rubbing their hands in glee over all of this.

Even among those who didn’t actually commit the crime, many are celebrating this as a victory. Why give them any more to celebrate?

Please? Take the pictures down.

If you have posted or shared an image of yesterday’s horror that could be traumatizing to a child, stressful for those who were there, or rewarding to an enemy, would you please take it down? I’m not saying to delete them from the record completely. And if you have something that would be relevant for law enforcement, by all means, do the right thing.

Protect the injured. Don’t exploit them.

Then, let’s take this a step further.

As Americans, we’re about triumph, not tragedy. The bad times shape us, but they don’t define us. Instead of posting images of tragedy, how about images of triumph in some way?

If I was the mother of the little boy who was killed yesterday, I’d sure like to know that his too-short life impacted the world in a positive way.

So I am issuing a challenge: share a moment of triumph. Put it in the comments here (I’ll start with my own small win. Can’t wait to see yours.), or on your personal Facebook page. Share it on Twitter (hashtag #Triumph). Or just tell someone you love something good today.

In honor of those who paid such a high price yesterday…it’s the least we can do.