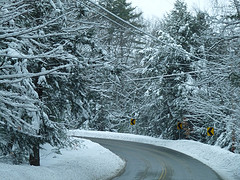 I live in beautiful Colorado, where the weather forecast is a really – really – big deal to people. I base this on the outrage and gnashing of teeth over a recently forecasted blizzard that never developed. The expected foot of snow turned out to be more like four inches, and boy, did the television meteorologists hear about it. Angry mobs stormed the TV stations, threatening to muss the hair of every anchor and reporter.

Look, predicting the weather is hard, especially in a geographically-unique setting like Colorado. It’s a nightmare for even the most seasoned weather pros, despite their multi-million-dollar equipment, complicated algorithms, and suspicious year-round tans. They’re usually very accurate, which we immediately take for granted. But they can’t be perfect; our planet is a roiling, ever-changing cauldron of forces beyond our comprehension, so sometimes instead of twelve inches of snow we get only four.

And people freak out.

At this point you’re wondering: What does this have to do with building a better student? Fair question. Think of it this way: TV meteorologist is to TV viewer like school teacher is to parent.

In both cases we tend to expect perfection. Not only that, but we transfer all responsibility, so that the weatherman is responsible for messing up our day. Never mind that they’re doing the best they can with finicky Mother Nature; we hold their feet to the fire, when in reality it’s up to us to be prepared for anything from rain to sun to snow.

Ultimately, the responsibility for our kids’ education lies with us and – just as importantly – with our kids. Too many people take teachers for granted during the grind of 170-plus school days each year. When there’s an occasional blip on the radar, some parents freak out.

It’s an ugly aspect of being human; we leap to assign blame, because that exonerates us from any guilt in the matter. Rain on the afternoon of your big barbecue after a promise of sun? Demon meteorologist! Jaden and Paden both pulled a 2.4 in high school and were discipline monsters? Demon teachers!

We lead by example, and the very best leaders assume responsibility, not just when it’s sunny and warm, but when the snow flies.

It’s possible that your kids have never really considered the idea of influencing their own outcome. Maybe they’ve always viewed school as a place where “I sit and listen while the teacher teaches.” How much more powerful for them to instead approach it this way: “The teacher teaches and I enhance/implement it.” How do you think that might affect the outcome?

Shovel some of the responsibility onto the shoulders of students. When it’s all said and done, they’re the ones who either reap the rewards or get left out in the rain.

We can’t control the weather, and neither can the talking heads on television. What we can control is our preparedness and our adaptability. The same holds true with our kids’ education. While the teachers’ role is massive, the responsibility for the outcome is also in the hands of parents and students. It’s a cooperative effort – or at least it should be.

Few things are an exact science. All of the double-Doppler in the world can’t ensure a reliable forecast, any more than a resource-strapped school can guarantee perfect results for every student.

Now let’s go to Tina with a look at traffic.

Earnest Parenting: help for parents who want their kids to take some responsibility.