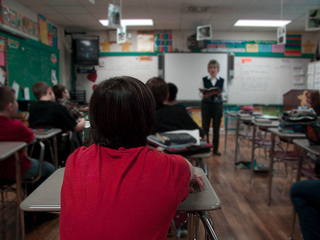 One of the hats I wear is that of public speaker, which means I’m often looking back at a sea of faces in a crowded room. In the past week alone I’ve been on stage twice, sharing insights and laughs with a few hundred people.

It’s interesting to watch people file into an auditorium or assembly hall and choose their seats. The front half of a room is often sparsely populated, while the seats in the back fill up quickly. Few people automatically move toward the front, and nobody, it seems, ever wants to sit right on the front row.

Which is odd, because if I was Jon Bon Jovi there would be a stampede for those seats. For a presentation or training session, though, many people sit as far away as possible. C’mon, I’m no Jon Bon Jovi, but I’m not Medusa, either.

Recently I started thinking about the front row/back row situation as it pertains to education. Does it make a difference where a child sits in class? Does her seat selection influence her outcome?

The only evidence I’ve seen is anecdotal, but it’s powerful.

A friend of mine told me the story of her daughter, who is mostly a B or C student. She’s also an extremely social child – which partly explains the grades. During a brief conversation one day the mom asked her daughter where she sat in class. Not surprisingly, the answer was ‘in the back.’

“Do me a favor,” Mom said. “Spend the next week in the front row. Just as an experiment.”

At the end of that week the daughter had scored a resounding A on a paper and on an important test. In fact, her test grade was the highest in the class. The mother says that she’s convinced the seating change played an important role.

Think about the factors involved:

Countless distractions – When you sit in the back, there’s a veritable sea of bodies, movement, and chatter between you and the teacher.

Better vision – Kids near the front of the room have fewer problems seeing the examples on the board or the screen. Add to that the noise; it’s harder to hear the teacher in the back.

Teacher’s perception – This is simply human nature. No matter how responsible and/or accomplished a student may be, it’s natural for an educator to assume that someone sitting in the back is disengaged from the learning process. Plus, how many jokes have we heard about troublemakers in the back row? Studies with university professors have confirmed that they do indeed form an impression based upon where a student chooses to sit.

Like my friend, perhaps you should have a casual chat with the young person in your house. Talk to him about where he sits in class; if he regularly hangs out in the back, encourage him to move forward. Then track the results over time.

I believe this choice spills over into other aspects of our lives. People who choose to sit near the front develop a better attitude and more confidence. When I speak at a conference, I sense a strong character in the folks who boldly stride down the aisle and sit in the first two or three rows; they almost exude an air of self-assurance. They strike me as leaders.

Your son or daughter would do well to consider this change. Sure, it might be tough for them at first, but they’ll quickly grow into it. Not only will they be more likely to pay attention in class, they’ll establish a better relationship with their instructors. Believe me, as a professional speaker I can verify that eye contact builds rapport and trust.

By the time she graduates, your child likely will have developed a front-row attitude toward life. And that’s a benefit that goes well beyond test scores and grades.

Earnest Parenting: help for parents who want their kids to be better students.