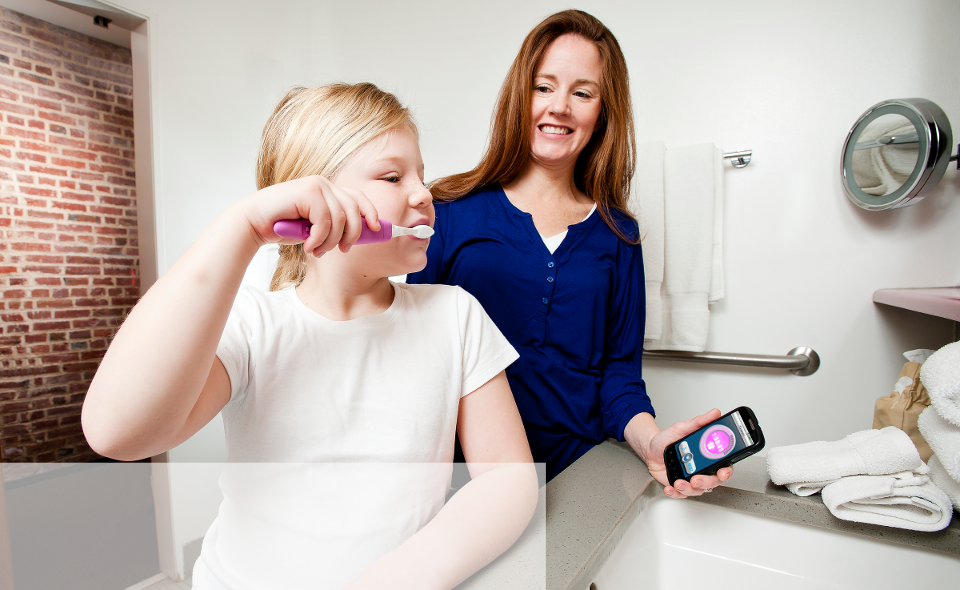 It was bound to happen sooner or later, Heroes. There is now such a thing as an app-connected toothbrush to help you get your kids to have better dental hygiene.

When you buy the Beam Toothbrush, you also download and install the free app to your phone or handheld device. The app is available on iTunes and Google Play. Follow the directions to sync your device with the brush via Bluetooth and voila! You can instantly monitor your child’s brushing activity.

I had TechnoBoy use the brush, and I was rather sneaky about it. I didn’t tell him about the app part of it. It was for scientific and experimenty reasons, honest. I did explain that all later, at the end of my test.

The Beam has a built-in light that glows with use. Using the toothbrush can trigger it, and it stays on during brushing (it does shut off after 2 minutes). This can help the child know how long to brush. Periodically, you sync the app with it (which also requires the light to flash when you push the button) and it fills in a calendar to let you know when brushing did or did not occur.

Installing and using the app was very simple. When I went to sync it up again later, again, that was very simple. No problems. TechnoBoy did use it, and had some interesting feedback: because he’s been accustomed to using a motorized toothbrush with a head that spins, he was less sure that this brush was doing a good job on his teeth. He said that even just some vibration of the head would have made him feel like more cleaning was happening.

A really great feature of the app is the ability to earn rewards for brushing. Set goals in the app, and when you achieve them, you earn rewards like discounts and giftcards. I really appreciate how motivating this little brush can be! When I first learned that this brush cost $49.99, I was a little concerned about the price. However, it’s hard to put a price on kids who are brushing properly. And earning the rewards can offset that cost.

The Beam toothbrush comes with its own stand. It comes in pink or blue, with either an adult or child size head. Replacement heads are available for $3.99.

Earnest Parenting: help for parents who have HAD it with kids who don’t brush enough.

FTC Disclosure: I was given a free Beam brush in order to do this review. None of the links are affiliate links. In general, I really like the brush, although a spinny head might be nice. I’m just sayin’.