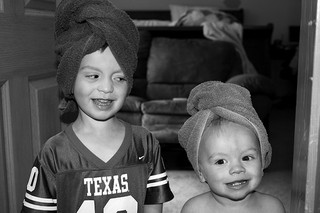 He ran into the living room with his head completely wrapped in a towel, leaving only a tiny opening through which to see. At four years old, he displayed the spirit and restlessness that comes naturally at his age. On this particular afternoon he was in the care of his aunt, a good-hearted and practical woman.

“What are you doing?” she asked.

The woman shook her head, an amused look on her face. “No, it looks like you just have a towel on your head.”

Five minutes later he was back, this time with a different towel wrapped around his body. “I’m a rock!” he proudly stated. His aunt clucked and told him that no, it was a towel, not a rock.

The four-year-old trudged back out of the room.

Thanks to our so-called mature minds, in some ways adults are woefully unfit to raise kids. Children are, without a doubt, born with a magnificent gift: their sparkling curiosity and sense of imagination. Ask anyone who has raised a pre-schooler; their little minds craft the most entertaining of worlds.

Forts beneath blankets that drape chairs; trees that really are dragons and must be fought with long sticks; animals and faces drifting overhead, masquerading as clouds.

And then what do adults tell them? That’s not a tunnel; it’s a towel on your head.

The boy’s aunt meant well, I’m sure. She probably saw her role not simply as babysitter for the day, but also trusty adult guide, there to instruct her nephew at every opportunity and to correct what she saw as abnormal.

But kids would be better served by extending those imaginative years just a bit more.  Not to imprison them in a life of fantasy, but to encourage their minds to investigate every crack and recess; to explore not only life’s realities, but life’s possibilities.

Because, not so many years ago, things we take for granted today were labeled exactly that: impossible. Travel from Europe to North America in seven hours? Preposterous. Communicate around the world with a device in your pocket? Nonsense.

I have no proof, but I’m willing to bet that the Wright brothers and Steve Jobs were kids who sported well-developed, colorful imaginations. They refused to accept the world as it was, preferring to dream of how it might be. In essence, they grew up to behave in a manner that society deemed abnormal.

Perhaps we’re jealous. Maybe, as adults, we resent the cold, practical life in which we work, day in and day out, and we envy the playground-world of the young, in a perverted version of misery-loves-company. So we squash their imagination.

Whatever the reason, we’re too anxious for them to grow up, and we’re too intent on cramming all of them into the same mold. We standardize this and standardize that, when, to me, there doesn’t seem to be a standard child.

My foundation publishes the creative writing of middle school students. It’s no surprise that the sixth graders enthusiastically participate, while fewer seventh graders submit stories, and only a handful of entries come from the eighth grade. As they advance through school, it would seem their creative side retreats. Or is hammered out of them.

I’m all for a thorough education with strong lessons in practical knowledge. But I’m also a believer in nurturing the unique, exotic imagination within each student, helping them to hold on to a chunk of that abnormal juvenile spirit.

What wondrous achievements might someday come when we just let children be the tunnel? That’s where adult innovation is born.