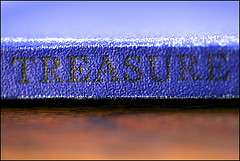 Children can be so energetic that adults often wonder how they can provide a suitable outlet. Organising a treasure hunt is a fantastic way to get your children outdoors, allowing them to use their energy and imagination. Better still, it is a free form of entertainment and exercise! Here are some fun variants on the typical ‘treasure hunting’ games for kids.

Not all families have large gardens or easy access to local parks. And some days the weather can be too bad to go outside. Fortunately, treasure hunts can take place indoors too.

Hiding small objects – like marbles – means that a search won’t be too easy for your children. To make things a little bit more of a challenge, set a time limit of the treasure hunt: whoever finds the most marbles within 10 minutes is the winner.

From a safety perspective, consider making the kitchen (where they could hurt themselves), off-limits for treasure hunting and inform your child that you’ve only hidden objects in low locations (to prevent them from climbing too adventurously).

Create a paper trail with riddles or clues that need to be solved to determine the location of the next clue. For example: ‘The next clue is in a location beginning with the letter T’ could be used for a clue hidden in a tree, or behind the television.

Alternatively, for older kids, you could put your paper clues into code form: use anagrams, Morse code, mirror writing, or letters substituted with numbers. Once the code has been cracked the location of the next hidden clue will be revealed.

Bringing Back Objects
Instead of finding hidden objects, the children are tasked with bringing back a certain number of items from the hunting area. If playing outside, this could be the leaves from eight different trees, stones of different colours, or feathers from different species of birds. Once the series of objects has been collected, help your child identify the animals, or plants that provided each sample.

Alternatively, give the children a list of objects and tell them to bring them to you within a set length of time. If the treasure hunt is taking place indoors they might have to bring back: 1 blue hat, a filled glass of water, 4 coloured pens, for example.  Once an object is brought back, the adult in charge gives them the clue to find their treasure.

Show kids zoomed-in photographs of where particular objects are hidden. This type of treasure hunt will take more preparation on behalf of the adult, but it will add a new dimension to the traditional versions of the game. The difficulty of the hunt will be determined by the distance from which the zoom has been used.

Tips for a Successful Treasure Hunt