Listen to Your Kids AND Music With Sound Band 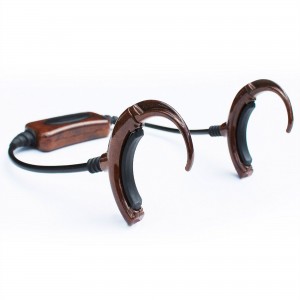 Heroes, I was pretty interested when I learned about the Kickstarter campaign for Sound Band. Imagine a headset that allows you to listen to your personal audio AND your kids at the same time! Sound Band will do just that. It doesn’t use speakers. Rather, the earpieces fit over the outer ear and transmit the sound to you using vibration.

Because we deal with some hearing issues here at Earnest Parenting, I was especially interested in Sound Band. I imagine that people can listen to audio with less damage to the inner ear (you still shouldn’t listen to audio too loud – I’m just sayin’). How amazing is that?!?

This would also have some practical applications while driving, allowing you to hear critical sounds you may have missed with ear buds in.

You can see for yourself in this video. It’s about 4 minutes long, but I really enjoy it. (Translation: I have watched it several times. Yes, I am a geek.)

As of the writing of this post, there are still ten days to go in the Kickstarter Campaign. They have raised almost triple the amount needed to fund, so it’s a go on all cylinders, I’m thinking. If you want to join, get there quickly. The lowest supporting amount is $135, and that gets you one Sound Band delivered in December. They will retail at $189, so this is a savings (and a great Christmas gift for someone!).

Also of note: Sound Band’s innovators are allowing anyone to create an app to work with the hardware. I believe you can already use it for phone calls.

Earnest Parenting: help for parents who want to hear audio and the kids at the same time.

FTC Disclosure: I received no compensation for writing this post. I have not personally used Sound Band, although I am seriously considering buying one. It looks like a mighty sweet device.