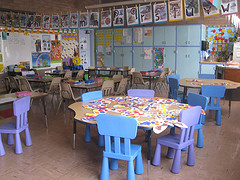 A friend of mine writes terrific children’s books, with multiple bestsellers and a loyal fan base. Recently he found himself embroiled in a dispute with an editor who claimed that his latest work contained language “too advanced for the target audience.”

My friend pushed back, on the grounds that he’d hosted presentations at schools for years and had a good idea of what vocabulary worked and what didn’t.

Here’s another angle to consider: Two kids in the same class can be reading two to three grade levels – or more! – apart. So what does this mean for parents?

It means that you have to recognize that teachers have their hands tied because of class size. Some are fortunate to have a manageable number of students, while others are dealing with 30-35 kids. When it comes to books, one size does not fit all.

Look, we became an assembly-line nation with Henry Ford, and that approach spread from cars to cereal to computers to . . . well, to classrooms. It can be argued that hand-made cars have better quality, while mass production provides economies of scale. The same would be true for food items – think fresh green beans versus canned versions – clothing, furniture, and just about anything else.

So why expect a different outcome with our kids in school? It’s true that standardized lesson plans and tests (he says with a shudder) have gone a long way in educating millions upon millions of young people, but has it come at a hard cost?

And here’s the real question: Is it more damaging to society in general if some children get “left behind,” or if other children are held back? The editor in my first example might believe that it’s better to somewhat dumb-down the material, while my friend is all for pushing a kid’s limits. Both have children’s best interests in mind . . . they’re just different children.

Most people – and programs – are looking for a perfect solution, one that nourishes the intellectual needs of one hundred percent of students. But, again, this assumes that kids are as standardized as the tests . . . and they’re certainly not. Not even close.

Since the 1970s I’ve worked in broadcasting, where we must control recording levels; you can’t have one piece of sound barely audible while the next blasts out of the speakers. Today we use electronic equipment that automatically adjusts the volume; it takes low levels and bumps them up, while toning down loud spikes.

Standardizing reading with kids has the same effect. Granted, it might possibly lift struggling students up closer to average, but at the same time it must stall some kids as they try to reach ever higher. It’s impractical to assume that 30 students will read the same book with the same speed or ease.

While we might not be able to solve the problem, we can mitigate it.

I spoke with the parent of a first-grader. He told me that his daughter now reads at about a third-grade level, and she’s accelerating. By the time she’s in second grade she runs the risk of being bored out of her mind with her education.

The dad’s approach is practical. He keeps tabs on what his daughter’s classroom assignments are, and then he augments them with personal reading lists. It doesn’t interfere with the teacher, who has her hands full with students who lag in reading proficiency, while it keeps his daughter challenged.

It’s teamwork, really, between parent and teacher. Of course, some teachers will bristle at a parent’s choices, but, based on the work I’ve done with teachers and librarians across the country, I believe the majority of educators would embrace the parental involvement.

Communication is key: Keeping everyone on the same page is not only beneficial but courteous.

I’ll be curious to see how things play out with my friend and his editor. The idea of leveling the playing field in order to make sure each student has the same opportunities is noble, and, to a certain extent, necessary. But keeping students actively engaged in reaching higher is more noble still. It’s better for the child, for the educational system, and society in general.