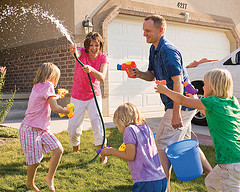 When you think about your kids having fun, you probably equate a lot of that with how many toys and games they have. However, at one point, piles of toys and games didn’t stop my kids from whining that they were, once again, bored.

I wondered how they could possibly be bored when they have all the toys and games they could ever want. However, as it turns out, that was actually part of the problem. You see, I found out that the more I gave my kids, the faster they became bored with it. Endless variety did not equate to endless entertainment.

This concept really struck home with me on a mission trip. The kids there had practically nothing to play with, and yet I never heard them complain about being bored. Instead they made up games, treasured their one doll or toy car, and made the best of a hard situation.

With this weighing on my heart, I decided to do something about it. As a family, we decided to make an effort to reduce the amount of stuff we had and really enjoy the things we kept. Even Mom and Dad were not left out. From grown up ‘toys’ like boats and motorcycles to roller skates, dolls, action figures and video games, nothing was left out of the loop. We attempted to reduce the amount of unnecessary stuff in our home and focus on what was important: relationships.

Cell phones were not left out either. The older kids that had cell phones were downgraded to a basic model, and even us parents agreed to make the evenings a ‘cell phone free zone’ so that we could focus on being a family.

I can’t say it has been an easy transition, moving from a home with every toy and game you can think of to one that only has a handful of things to ‘do’, but I can see that it has been well worth the effort. We spend far less time cleaning up after our kids or nagging them to clean up, and more time playing and talking as a family. We have gone back to classic games like charades and Pictionary instead of spending time in separate rooms on computers. The cards have come back out and the phones are put away at the table.

By focusing on the fun instead of the stuff, my kids complain less about being bored and enjoy spending more real time with friends and family members. They are also more active, and they spend more time outside riding their bikes, playing ball or just talking face to face with their friends. Although cutting everything out is not something most families can do, we can all focus on cutting down on distractions and concentrating more on spending quality family time together.

Ken Myers is a father, husband, and entrepreneur. He has combined his passion for helping families find in-home care with his experience to build a business. Learn more about him by visiting @KenneyMyers on Twitter.