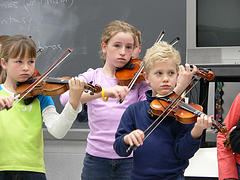 Consider a typical week in the life of Taylor – and I intentionally chose a unisex name, because this story applies to both girls and boys.

Taylor either expressed an interest in a particular sport at an early age, or was deemed to have exceptional skills in that area, or was pressured into it by a zealous parent. Regardless of the catalyst, Taylor now spends a minimum of five days a week practicing and playing the game.

And usually that game alone; the stories of multi-sport athletes are diminishing.

The weekend is dominated by a tournament, which can run from dawn to dusk both days. Summer vacations are limited because of off-season workouts and full-blown camps. Needless to say, the family’s entire focus becomes that one sport.

Or musical instrument, because the same thing happens with artistically-gifted young people. Perhaps Taylor devotes a sizable chunk of time to the cello.

In some respects, all of this is fine; millions of American kids are becoming proficient in football, basketball, or volleyball, and at least getting exercise. Parents across the country often encourage this single focus by rationalizing it this way: “Taylor might get a scholarship, which would pay for school.”

Now for the reality check: Financial aid through sports is unlikely. According to the NCAA, two percent of high school students receive even a partial athletic scholarship in college, let alone a full-ride. For 98 percent of kids, organized participation in their sport of choice ends at age 18, unless they attempt to walk-on and gain a spot on a university team. After ten to fifteen years of all-encompassing devotion, the instrument or sport might become a part-time hobby, if not abandoned altogether.

I’m all for kids putting effort into discipline and practice. My concern, however, is what they give up in exchange for that single-minded focus. What other areas of Taylor’s life might atrophy from lack of attention?

It’s an interesting dilemma. Our culture emphasizes becoming the best, but to achieve that greatness today requires total diligence and a time-consuming schedule. So, do you want your child to be the best at one thing for just a few years, or to develop a wide range of interests and talents that she might enjoy for the rest of her life?

A friend of mine fondly recalls her days in high school when she was a cheerleader, played in the band, starred in volleyball, and served in student government, all while working part-time at a variety of jobs. Her teenage daughter looks at her today with disbelief and asks, “How did you possibly have time for all of that?”

Exploring a diverse palette of options allows a young mind to experiment with multiple points of stimulation. To me, today’s laser-focused attention on a single extra-curricular activity robs students of the chance to sample life’s rich buffet. Will they be sorry later that they limited themselves to such a tiny fraction of their choices? Or will they never even know what they missed? I’m afraid it’s probably the latter.

And what about the effect on the brain itself? Does a one-track mind lack complete development? I don’t know the answer to this – but I have suspicions.

While I understand – and even appreciate – our nation’s competitive spirit, it’s possible that the result will be generations of young people who left too many doors unopened as they matured, unaware of the wonders behind them. Wouldn’t Taylor be better off fondly looking back on a multitude of memories and experiences, instead of that one short-lived dream?

Earnest Parenting: help for parents who want their children to explore a variety of interests.