Study Reveals Persistence as Important as IQ in Achieving Success 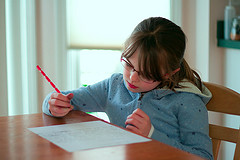 To some, the word “grit” conveys determination and perseverance. To residents of rural areas of the U.S., “Grit” is a folksy magazine that caters to agrarian interests. Add the word “True,” and “Grit” is the title of John Wayne’s only Academy Award-winning performance vehicle. And like Wayne himself, the word “grit” evokes images of supreme toughness, as exemplified by a person who completes difficult tasks despite hardships.

To Angela Duckworth, an assistant professor at the University of Pennsylvania, “grit” is a personality trait. Her research has dropped some tantalizing hints about the importance of grit to a child’s long-term success with difficult endeavors.

What made her choose this subject for research?

Duckworth began her career in education teaching math to middle and high school students. She noticed it wasn’t always the most intelligent kids who performed best on exams; it was usually the students who tried the hardest. This made Duckworth wonder if perseverance and effort were as important to students’ success as intelligence.

The professor defines “grit” as having the desire and determination to stick with difficult tasks until the tasks are mastered. While teaching, it became obvious to Duckworth that intelligence doesn’t explain everything about the likelihood of a person achieving success or suffering failure in life. There are plenty of smart people around who haven’t achieved much. And plenty of people with low scores on IQ tests have achieved a great deal.

Duckworth strongly suspected that determination was critical to life achievements. But, she wondered, if “grit” is a critical characteristic for achieving success in life, can it be measured? Or even taught?

After all, Duckworth thought, intelligence can be both measured and improved upon. IQ tests have been around in a wide variety of versions since the early 1900s.

She realized she needed to find a way to measure grit, and with that, she developed a test called the “Grit Scale.” On the test, students respond to a series of up to 12 statements, including such gems as, “Setbacks aren’t discouraging.” Tests are self-reported and subjective, so students could cheat if they wanted. But there’s no reward for scoring high or low, so most people are honest with their answers. Duckworth has discovered that a person’s “grittiness,” as measured on the scale, is predictive of future success under challenging conditions.

Duckworth applied her theories to two recent studies. One was conducted with cadets at the United States Military Academy at West Point; the other, with contestants at the Scripps National Spelling Bee. Both studies indicated greater success from participants who scored high on the Grit Scale than could be explained by qualities such as superior intelligence, leadership ability or physical fitness.

Duckworth is now turning her attention to how grit affects high school students in terms of their likelihood of graduating from college. She’s working with other researchers to test graduates of high-performing charter high schools in Houston, Philadelphia, California and Connecticut. The researchers’ aim is to better understand what characteristics can predict whether a student will stay in college until graduation – a trait called “college persistence.”

Charter school networks often serve students from minority and low-income families. These families typically have minimal college backgrounds to guide or advise their children about how to succeed in college – or life. These students graduate from college at lower rates than should be expected based on their high school records. The schools want to know why, and Duckworth hopes to help them find out.

Editor’s note: Oooohhh, I can’t wait to see where this goes! What a great thing we can say to kids: that their effort means so much. Mike Thomas is a general contractor. As a father, his interests have shifted toward sociology and education over the years. He is also a writer for HomeWarrantyDeals.com, a site providing information on appliance maintenance and home warranties.

Earnest Parenting: help for parents who want to encourage their kids.