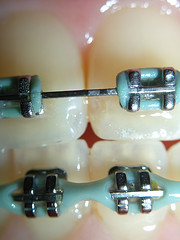 Your child needs orthodontic care. You’ve been to your dentist, but you want to review your options on your own. You’re fairly confident you can make an independent decision. You just need the information. Fortunately, it’s not that difficult to find what you’re looking for online. Most orthodontists  offer the same or similar services.

Braces
You’ve seen them. Maybe you’ve even had them as a kid. You hated them when they were on, but you loved the results when they finally came off. Today kids don’t have to endure the ridicule they once did. Braces used by NYC cosmetic dentist are often low visibility. That means that they can be installed in such a way so as to minimize the visibility of the braces and the brackets used to secure the tooth.

Brackets can even be placed behind the tooth. Braces work by applying pressure to the teeth and jaws to move them into a desired position. It used to be that you had to wear a mouth full of metal. Today’s braces are not fully banded. Instead, they can be bonded directly to each tooth’s surface.

Braces can be made of materials like stainless steel, ceramic, plastic, or a combination of several materials.

Invisible Trays
In lieu of braces, you have the option of wearing invisible trays. These trays fit over your mouth, almost like a mouthguard but are much less intrusive. They are often worn all day, and work in a similar fashion to braces. It’s hard to tell that the device is in, making is a discreet option if you don’t like the idea of wearing braces.

In general invisible trays are for those that only require simple orthodontic work. The method employs custom-designed and molded removable trays that put pressure on the teeth, moving them gradually into their corrected position. Usually, the patient wears multiple trays over time as the teeth begin to move.

TADs
TADs are temporary anchorage devices,” and are mini-screws that range from 6 to 12 milometers in length. They are temporarily fixed in the mouth and used to apply pressure on teeth for correction. TADs allow for more predictable and precise tooth control. They are also becoming very popular.

Rubber Bands
Rubber bands are used to move teeth when more force is needed to move them into the desired position. While these options are typically used on kids, they may also be helpful as an adult if you still haven’t had your teeth corrected.

Headgear
Some people can benefit from a device attached to their braces and secured around the back of the head. This is affectionately called “headgear.” It’s not attractive, but it’s useful when additional force is needed to move teeth into the desired location.

Retainers
Retainers are typically worn once braces are removed. It takes time for your teeth to settle after you’ve shifted them around. The retainer ensures that your teeth don’t move back into their old position. As with braces, retainers apply pressure to teeth to keep them in the desired position. The difference is that retainers are only worn to keep the teeth in place, not to move them.

Robert Ander is passionate about pediatric dental care. He enjoys blogging about general maintenance and options for treatment for issues.