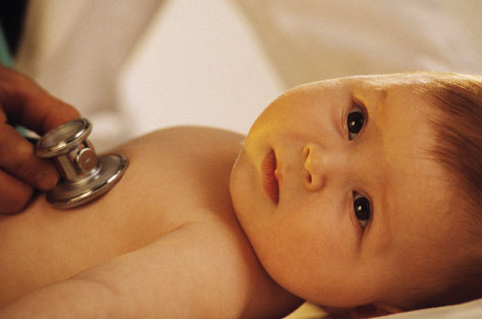 Despite the array of vaccinations that infants receive, there are a number of diseases that commonly occur among young children. Knowing what to do in the event that the child becomes afflicted not only prevents the severity of the ailment, but also hastens recovery.

Respiratory syncytial virus, commonly referred to as RSV, often follows a bout of bronchitis or pneumonia. Common symptoms closely resemble a cold or the flu. However, around 25 to 40 percent of infants afflicted may have initial symptoms of breathing problems that include wheezing. Parents should seek the advice of a healthcare provider if minor symptoms last longer than two weeks or if the child develops breathing difficulties. Physicians may prescribe the antiviral medication known as palivizumab, which prevents the progression of the disease.

Sometimes called “slapped cheek” disease, affected infants commonly develop a red facial rash that closely resembles a slap. The rash might also extend to the torso and limbs. Children may not have any symptoms prior to the appearance of the rash. However, other children may seem to have a cold. The human parvovirus B19 causes the ailment, which typically resolves without medical intervention in around three weeks. Occasionally, some infants develop more serious symptoms that include joint pain. If a child experiences an unusual amount of discomfort, a physician may recommend a course of symptomatic treatment.

A number of viruses may lead to the development of this disease including the common cold or influenza. The most notable symptom associated with the illness is a barking-like cough. Impaired breathing remains a serious possibility, which may require hospitalization. When symptoms progress to breathing difficulty, the infant should see a physician.

This bacterial infection is highly contagious and may affect children from infancy and up. The disease typically appears as clusters of fluid filled bumps or blisters that ooze a seemingly clear fluid. As the fluid dries, it forms honey-colored crusts. Anyone coming in contact with the fluid may contract the infection. Healthcare providers generally prescribe oral and possibly topical antibiotics, along with instructions as to caring for the lesions to prevent the spread of the infection.

Commonly called cavities, even infants are susceptible to this oral dilemma. The practitioners at Abougoush Professional Corp recommend that parents take infants to a family dentist as soon as teeth begin erupting. A healthy diet and resisting the urge to put the baby to bed with a bottle, go a long way in preventing cavity formation.

While a sick infant understandably creates a cause for concern, having knowledge about the possible perils of illness helps alleviate some of the stress that accompanies caring for a sick child.

Earnest Parenting: help for parents who are concerned about infant health.