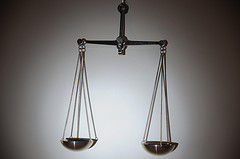 Editor’s note: as a general policy, the powers-that-be at Earnest Parenting do not subscribe the Big Bang Theory. We’re firm believers in Creation here. That said, we have a great deal of respect for Dom’s writings. Additionally, it is the policy of this site to publish articles even though there is disagreement, within some boundaries. So. There is disagreement, but that doesn’t stop this from being yet another one of Dom’s great contributions. Enjoy.

Perfection is often characterized as symmetry, and we generally prefer things that are symmetrical. We love it in art and nature, and we even judge people with relatively symmetrical faces to be the most attractive.

As much as we adore the beauty of balance, however, we owe our very existence to a critical imbalance in the very first second after the Big Bang, almost fourteen billion years ago. In that first second space was littered with particles of matter and antimatter, which – you might recall from science class – don’t get along too well. In fact, when a particle of matter meets one of antimatter they annihilate each other.

If there had been an equal number of each, the universe would’ve come to a screeching halt in that first instant; everything would’ve blown up. But for every billion particles of antimatter, there were a billion and one of matter. That remarkably tiny fraction of a difference – the perfect balance thrown off by one part in a billion – eventually allowed for the birth of every star and planet in the cosmos.

Students often get demoralized when they fall short of perfection, and it’s easy to see why. We’ve cultivated a sort of reverence for all things perfect, from the 300 game in bowling to a judge’s score of 10 to perfect pitch.

But remember the tiny accounting glitch in that first second of creation. It led to a miraculous gift of light and life, and the same holds true with your student’s path. Sure, we want them to do well, and we certainly cheer any test score of 100. Yet there are great achievements that linger on the outskirts of perfection, triumphs that never could’ve been realized without a mistake here or there.

From Post-It Notes to pacemakers, some of our greatest inventions were the result of screw-ups. Noted historian A.J.P. Taylor said: “Error can often be fertile, but perfection is always sterile.”

He’s right about that. We’re often suspicious of sterile machines because we consider them cold and impersonal; there’s something almost sinister about the way robotic assembly lines go about their business with rapid, calculated perfection. We appreciate the finished product – and perhaps the associated cost savings – but at our core we distrust these alien contraptions. Science fiction has played on that fear for a century.

They serve us well, but robots produce standardized, cookie-cutter components; there’s no room for serendipitous discoveries, no eureka moment when a mistake breeds improvement. That requires a human touch – and a human talent for finding success inside failure. That’s a lesson we can’t teach enough.

We are spectacular, imperfect beings, and that one-part-in-a-billion edge is all we need to create something beautiful and better.