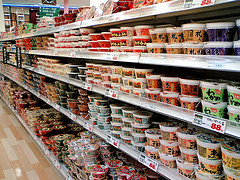 A famous rock star allegedly claimed that 32-track recording was ridiculous because the average person can’t distinguish the sound of more than eight tracks. He was convinced that the rest were wasted.

We generally live a life of overkill, and it begins quite early. We plead for the 64-count box of crayons, and wind up using our favorite six; Desert Sand and Magic Mint come out only once or twice.

It accelerates from there, until one day we’re in the cereal aisle at the grocery store, staring at ten different varieties of Special K. (Can they all be special?) A popular coffee chain touts the fact that they offer almost 90,000 different drink combinations. I did the math: If you try a new one each day you’ll complete the circuit around the year 2260.

Students today have a mind-boggling number of choices. In about twenty years television expanded from three channels to hundreds. Movie theaters that once had one or two screens now have two dozen – or more. App stores offer what seems like limitless programs to fill up a phone.

Choice is good, and I doubt that anyone would lobby for fewer options. But it’s possible that a blizzard of choices might obscure the very best, dulling our ability to choose correctly.

A friend of mine once claimed that excessive choice merely dilutes the overall product, and I think there’s some truth to that. Sports analysts claim that this has contributed to the declining popularity of professional baseball. There’s been a 50% increase in the number of teams in the last few decades, offering additional choices for fans, but diluting the product on the field. Today a .240 hitter can be an All-Star.

And when alternatives become exponential, do we run the risk that choice will be engineered away altogether? Why suffer through the agonizing job of making a decision when you can create a new possibility from scratch?

What does this mean for our students? The genie is out of the bottle, as they say, and we’re not likely to reduce choices overnight. But the goal for young people should be to keep their standards high in the face of such overwhelming options, and to not allow the staggering myriad of choices to erode their push for excellence.

Too many choices can induce a sort of paralysis in people, preventing them from making a decision. Students need to become confident in their decision-making abilities, not paralyzed. Let’s help them push aside the excess clutter and zero-in on the best.

When someone offers them 32 tracks, encourage them to find the supreme eight. The rest are only white noise.

Dom Testa is an author, speaker, morning radio show host, and has kept a ficus tree alive for twenty-three years. He’s also the founder and president of The Big Brain Club, a non-profit foundation that helps young people embrace the idea that Smart Is Cool. More info at www.DomTesta.com.