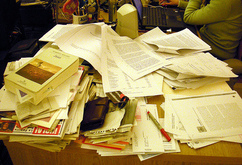 Ever heard of work fragmentation? It’s a term used to describe the constant interruptions that people experience in the office. Some experts believe it happens an average of 50-60 times a day, and that more than half of our time at work is spent not actually working, but instead dealing with interruptions.

That’s significant – but not surprising to anyone reading this. We even interrupt ourselves multiple times per day. (Postscript added later: While writing this piece I counted seven interruptions, four of which I caused myself.  What can I say? Snacks speak to me from the pantry and are hard to resist.)

A study conducted by UC Irvine and the Institute of Psychology at Humboldt University found that, while these breaks can wreak havoc on our productivity, it’s not necessarily that it takes us longer; we just hurry up to counter the interruptions, thereby creating stress, frustration, and often a sloppy outcome.

So how does this apply to your student? She may not be going into an office each day, but her work (homework, class projects, etc.) is important, too, and the constant start-stop-start-stop activity is just as damaging.

In their book I Hate People (Little, Brown, and Company, 2009), Jonathan Littman and Marc Hershon describe how it takes anywhere from five to fifteen minutes to get back up to speed after your brain is diverted from a task. Multiply that by four, five, or more interruptions, and it’s no wonder that your son is scrambling to finish his essay.

Think about how most kids do their homework. They might sit at the kitchen table or in the dining room, with people bustling around them or a television blaring in the background.

Or perhaps they go to their room, but they’re either responding to texts or tweets, or constantly adjusting the music on their digital device. Their concentration is under attack at all times. And yes, a large number of their interruptions are self-inflicted. Once they get off task, however, it’s a while before their mind is re-engaged.

I propose a different type of work space in your home, one that is dedicated entirely to enveloping your child in a dome of creative energy. If you have a home office or den, that could be perfect, provided that the door is closed and family noise is eliminated. If it’s her bedroom, it should be a space that fuels her creativity instead of sapping it.

That requires a minimalist desk, meaning a clean work top and only the tools necessary for the particular project at hand. Phones? Please, you know the answer to that: turned off, preferably in your possession, not hers. Music is a wild card here, because some creative geniuses thrive with music in the background. The key is to limit or abolish the constant skipping and editing; she’s there to work, not play club DJ.

Just as important, I think the work space should have a natural, almost intrinsic vibe, one that powerfully projects an aura of “here we create.” In my own writing room I have gobs of books shelved around me, a bass guitar and amp sitting in the corner, a photo of John Lennon at work in the Abbey Road studios, and a signed poster from a Ray Bradbury speaking engagement. These all emit one single idea: This room is devoted to art.

Find the space and the trappings that will help your child to submerge himself in a creative space, one that is free from distractions and interruptions. Well, except for an occasional snack; that voodoo is often impossible to ignore.