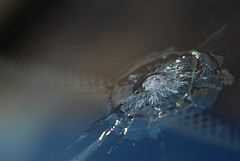 I merged onto the highway for the drive home, settled in with some good music, and all was right with the world . . . until a truck kicked up a large rock that smacked into my car, leaving a nasty star-shaped reminder of why we have windshields in the first place.

Instead of rushing out to get that one little scar patched, I neglected it for a week. Then two. Then a month. And then one day, while cruising along, I watched that innocent ding suddenly spread into an ugly crack that ran across the entire glass.

If only I’d taken care of the original damage, I would’ve saved myself from having to replace the entire windshield.

Our kids suffer minor dings, too, and I’m not talking about skinned knees. Sometimes it’s one incident in school that makes an impact on them, and, if left unaddressed, it can later spread across their lives.

A young man that I talked to – we’ll call him Mike – claims that he has carried around regrets about his education for years. In middle school Mike was on the right path, a good student who participated and sincerely enjoyed the classroom. Then, on one fateful day, another student invited him out to the parking lot during lunch to try marijuana.

Mike says that he knows it was the wrong move, but he didn’t want to seem like “a weenie.” So he did it, and, in fact, became a regular with the pot crowd. That crowd, it turned out, didn’t think much of school, or the teachers, or anyone who showed any academic potential. Mike hung around, with his hands in his pockets, afraid to say anything, and eventually just adopted the same attitude.

He dropped out of high school his junior year, and today points to that fateful invitation to smoke. From there, he says, the cracks began to spread.

We can’t shepherd our kids everywhere, and we can’t sit on their shoulders like the proverbial angel. They have to live their own lives, and we know when they leave home for school or various social functions that a variety of distractions – both good and bad – await them.

But we can be vigilant in watching for the dings, especially the ones that threaten to knock them off a path. Mike says that he knows his parents suspected what was going on, but they never questioned him. “They trusted me, which in some ways is nice,” he said. “But how much trust should you really put in a thirteen-year-old? Looking back I wish they’d stepped in.”

Parents usually can spot danger zones pretty quickly, particularly when it comes to peer association. You’ll often hear, “I don’t care for this friend of hers,” or “I think that guy is a bad influence on him.”

Perhaps an isolated incident that – on the surface – seems insignificant actually is foreshadowing a behavioral change that might escalate into serious trouble. Catching it early never guarantees a sunny outcome, but it certainly improves the chances.

Are you worried about upsetting your child by stepping in? Ask yourself this: Would you rather she be mildly irritated in the seventh grade, or seriously regretful at age 25? Parenting – and building a better student – requires adult supervision taken to its extreme degree.

Watching for those minor dings now, and taking care to patch them early, can often prevent the serious cracks that otherwise bring heartbreak.

Dom Testa is an author, speaker, morning radio show host, and has kept a ficus tree alive for twenty-three years. He’s also the founder and president of The Big Brain Club, a non-profit student development foundation. His new book, Smart Is Cool, will be published in August, 2014. More info at www.DomTesta.com.