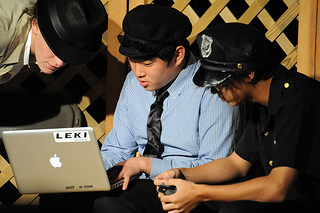 I never thought I’d write an article like this. After working with students for more than twenty years to help them embrace the idea that Smart is Cool, I have to call out some students who have abused the notion.

We know that many bright kids throw away their education because they want to fit in with the so-called cool crowd; that’s what my non-profit foundation’s work is all about. And yet we need to recognize that bad behavior can sometimes flow in the other direction.

Jacob is a fantastic student, excelling in all of his classes, and immune from the pressure to dumb down. Yet rather than maturely devoting himself to his studies and a normal social life, he behaves in a condescending manner to kids who perhaps aren’t as academically successful.

I’m all for celebrating academic achievement – I love to see the “proud of my honor student” stickers. But, at the same time, the last thing we want is to have honor students heckling other kids in the way that some professional athletes thump their own chests. That doesn’t help the cause of education; it likely has the opposite effect, turning some kids off to school.

Jacob is too full of himself. The attitude of “I’m way smarter than you” isn’t what we’re looking for. We’re looking for academically-successful students who are proud of their achievements while lending a helping hand to others. Instead of talking down to his peers, we need Jacob to lead by example, encouraging his fellow students down the right path.

Chloe is another great student, a high-achiever in the classroom. But because of her early success, she has developed an “I already know it all” attitude.

I’ve seen this while hosting writing assemblies and workshops at schools. Chloe is the student who – at age thirteen – sincerely believes that she knows everything she’ll ever need to know about writing (or math, or science, or whatever) and therefore dismisses new ideas and new concepts.

Again, celebrating academic achievement is great . . . as long as the student doesn’t feel like she’s crossed the finish line. As a parent we can praise Chloe for a job well done while still inspiring her to remain curious and creative.

This second example is the most challenging of all for parents because teenagers naturally believe that they know it all anyway. We can’t point fingers because we were exactly the same way at their age. Instead, it takes patience as a parent to guide these sharp young minds and gently show them that – regardless of how gifted they may be – they still have a long way to go.

Smart is Cool. Intellectual arrogance is not. Let’s build a better student who is proud of her achievements, but humble enough to keep learning and to help others find their way.

Dom Testa is an author, speaker, morning radio show host, and has kept a ficus tree alive for twenty-three years. He’s also the founder and president of The Big Brain Club, a non-profit student-development foundation. His new book, Smart Is Cool, will be published in August, 2014. More info at www.DomTesta.com.