Building a Better Student: Circles From the Air 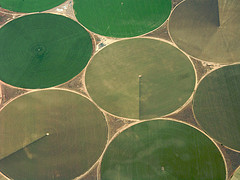 The flight from Austin to Denver was routine. We pulled away from the gate right on time, the guy next to me had already drifted off to sleep with his earbuds snugly tucked, and I settled in with a million-page Michener novel. (Is that redundant?)

After so many years of choosing window seats, the view from 37,000 feet was familiar and strangely comforting. The lakes, the highways, the shadows caused by stray clouds, the thousands of circles . . .

Those circles. Have you noticed them? The endless patchwork, dotting the landscape? Have you ever turned to the person next to you and said, “What’s up with the circles?” (Note: If the person is asleep with earbuds jammed into his head, don’t do this.)

Funny, but I’ve never remembered to investigate this question after touching down and retrieving my carry-on bag from the overhead compartment – whose contents may have shifted during the flight. And then on the next flight I’ll find myself peering through the acrylic pane again and wondering. This time, however, I made a note on my phone: Circles from the air.

Turns out that it’s not the most exciting answer – sorry, no aliens – but at least I’ll know it for the rest of my life, which will be helpful in case I’m ever the guy in the middle seat. It also made me realize something else.

(First, the simple answer. The plethora of circles are the result of something known as center-pivot irrigation, or sometimes simply called circle irrigation. It’s a form of crop watering that allegedly works better and conserves natural resources. Long tubes roll on wheels around a center pump, creating round crops and . . . well, that’s enough about that.)

Here’s what popped into my head after reading up on this farming technique: If I was a four-year-old, I’d pester the hell out of my parents until they explained what those circles were. Four-year-olds ask WHY – along with other questions – something like 250 times a day.

In fact, we’re at our most curious at age four. After that, apparently, we pick up on the fact that mom and dad are mentally exhausted and we clam up.

But curiosity is vitally important. It’s true that we live in an age where information is so readily available (not all of it accurate, of course) that we’re almost numb to it. We swim in a sea of minutiae, and I wonder if that diminishes our natural interest in learning. Sadly, I know how many yards rushing my favorite team had in a silly pre-season game, but I’d never bothered to find out about something that actually feeds me on a daily basis. I’d stopped asking WHY?

Perhaps you can extend the lifespan of your child’s curiosity. I know we get cranky after Question #214 – that’s usually around 5:45PM – but we should suck it up and remember what a great gift it is. We WANT curious children; shutting them down means a population of mental zombies who aren’t engaged beyond 140 characters or mindless YouTube stunts.

My pursuit of circle knowledge took two minutes. The greater awareness, though, will help me for years. Are you on board?