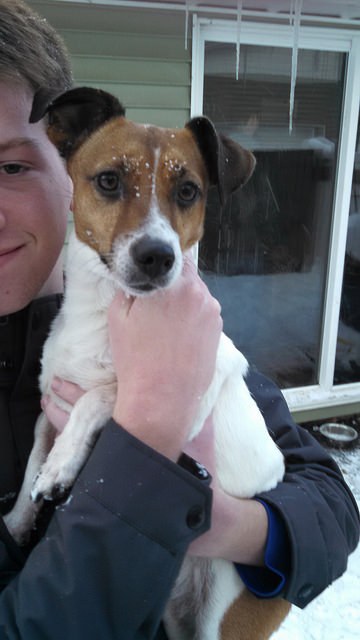 So, we had a very sad week here at Earnest Parenting. We decided that Marlee, one of our beloved dogs, needed to find a new home.

To explain: we got Keely when she was a puppy in 2009. In 2012, we got Marlee from a local rescue organization. We believe she was 2 years old at the time. When M-dog arrived, Keely spent a LOT of time just barking at her. They never really bonded and became friends the way we’d intended but they did seem to get along well and this spring we even saw them chase one another playfully here and there.

In June after 3 days of stress (people were driving in and out of our driveway repeatedly due to a neighbor’s garage sale and then our immediate neighbor hosted an open house – more people on our lot) the dogs got into a massive fight and Keely was badly hurt. We were able to patch things up, but their relationship worsened all summer to the point that we had to keep them separate at all times to avoid another altercation.

I found a wonderful trainer locally who took them about ten days ago and did wonders for resocializing them. Her conclusion, though, was that Marlee really needs to be in a family where she is the only animal. She adores people and kids, but not other dogs. Or cats. She wants to hunt cats and rodents. Ultimately Marlee was my dog. Keely is more bonded with the boys. That and the fact that we had Keely first led to the decision to find Mar Mar a new family.

The conversation began on Tuesday and then on Thursday we went and picked up Keely and said goodbye to Marlee. (It has been decided that keeping her where she is while we look for a new family is the more stable choice.)

Wow, what a difficult week.

Each boy took the decision differently (as did Hubby and I). The younger ones shed some tears. I bawled for 2 days. The older ones were sad but not expressive, and Hubby kept most of his reaction to himself. Most of us are already put back together, but Captain Earthquake seems to be taking it the hardest. He woke up yesterday with, “I dreamed about Marlee” and was rather sad. He’s needed a lot in the way of extra hugs this week.

Here are some things I did to try and help us through this experience.

Some of us cried, some of us didn’t. At least one of us needed lots more in the way of hugs and support, and keeps bringing up his sadness. At least twice we’ve had serious talks about the fact that it’s not wrong to cry, and it’s not wrong to stay sober. We must respect each person’s reaction and not accuse them of being too soft or too hard.

Offered hugs and support as needed

Hugs aren’t my love language necessarily, but I made sure to be available to the boys who needed them as often as they needed it. We also explained to the older boys that if they need hugs or support we’re here. If they don’t, that’s okay too. We love them and want to stay within their comfort zone.

Checked in with them often

Without getting too much into their space, I still tried to ask each boy privately every day if he was okay. We’ve been working hard on our relationships this year and I’m pleased that they were willing to answer me directly. Usually I’d hear something like, “Yea I’m a bit sad,” or “I’m okay now” from them.

The Captain in particular needed to cry it out on Tuesday and he retreated to a dark corner to do so. I joined him for a hug, then asked if he needed to be alone. When he said yes, I left him. I needed some time to my own self earlier that morning for the same thing: a good cry. Also, we drove 2 vehicles to get Keely and say goodbye to Marlee. (In part this was due to Hubby meeting us after work). The older boys rode home with their dad and I kept the younger ones. We thought this would allow time for any sadness with a little more privacy. Each vehicle had a box of tissues, just in case.

I was pretty sure that once we had gone through the goodbye that people would feel better. And indeed, that is mostly the case. We are all still healing and there are still a few difficulties to overcome as we find a new family for our girl, but I think the most difficult phase has passed.

Boy. I hope we don’t have to go through a time like this again for a good long time.