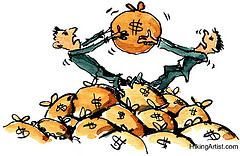 We’re suckers for the age-old question, “What do you want to be when you grow up?” Maybe we want to see if kids are interested in our own career choice, or maybe we just want to be reassured that the next generation shares our values.

For years kids responded exactly the way we wanted them to: They always said firefighter, nurse, astronaut, doctor, etc.

Those days are quickly evaporating.

Sure, in a survey done earlier this year police officer, firefighter, and doctor all scored in the top ten. But they were far below the top two responses – the same two that have dominated these surveys for the last five years or so.

Today’s kids once again chose “rich,” followed by “famous.” Most probably hope for a combination of both.

These results cause quite the wringing of hands, and I must admit that I originally fretted, too. But now that I’ve digested everything, I’m not as bothered.

See, the path to these outcomes wasn’t discussed. If the kids had all proclaimed that they wanted their own reality TV show, then I’d be depressed. But there are many ways to become rich and/or famous.

Early designers of the artificial heart did pretty well for themselves. Elon Musk, the force behind Tesla’s electric cars, the SpaceX program, and SolarCity, one of America’s largest solar energy providers, is worth a couple of billion dollars without appearing once on a Kardashian show. And we all rely on the gadgets that Steve Jobs and Steve Wozniak brought to the marketplace.

We cringe at the notion of “rich” and “famous” because we assume that the young people have no interest in working for their rewards. That’s unfair; I’ve seen the hours and hours that some kids invest in their passions, and it’s inspiring.

(Disclaimer: 6% of kids did answer the survey by stating “I don’t want to work,” but I’ll bet that more than 6% of us adults have muttered that at 6 o’clock on Monday morning.)

As parents, we can use this survey as a teaching moment, talking with our kids about what it actually takes to achieve their dreams of riches. Being a YouTube sensation might capture their fancy – the ‘famous’ element – but we all know that education, attitude, and work ethic are the most reliable vehicles for actually delivering success.

Our job is to help students connect the dots between learning and living large. School is step one, followed by rolled-up sleeves.

There’s nothing wrong with a young person’s desire to be wealthy. Let’s make sure we show them a path where they can achieve it while providing value and service to others. Once they learn that – along with a heavy dose of giving back to the community – we won’t worry about how famous they get. And they probably won’t care either.