Monday Giveaway Linky – Getting Through to Them Edition 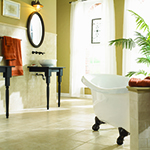 After years of repeating myself….a lot…I think I’ve made progress lately. We tore out a bathroom because it was starting to get moldy (boys take showers that are TOO long!) so now the boys have invaded the parental space as it were.

Translation: 3 times in as many weeks I have had to rush all the way downstairs to grab toilet paper because no one made sure the bathroom was stocked adequately. I mentioned to people several times that this was a problem, but there was not much of a response.

After the 3rd episode, I’d had it. Boys were called for an impromptu meeting, and I explained to them in no uncertain terms that the male anatomy is shaped in such a way that liquids don’t…adhere. Female anatomy, on the other hand, is NOT THE SAME.

I let that sink in for a bit, then told them that women need to use toilet paper every time they are in the bathroom. Proper bathroom etiquette and good family citizenship requires that if you finish a roll, you make sure a new one is in place. I finished the conversation by threatening that if this situation does not improve, next time I’m gonna draw pictures.

Heh. We’ll see if that helps. I will keep you posted.

So while I’m running after toilet paper, I hope you enter a contest or two and win! Good luck!!!