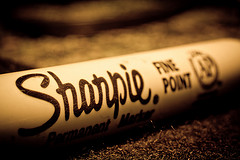 I lost my temper the other day. And not just a little.

I lost it COMPLETELY.

It all started when The Mercenary came in and started rifling through my desk drawers while I was sitting there. When I asked what he was doing, he explained that he was getting a permanent marker out to label the plastic bag each boy was using to pick mulberries and fill with water and for other sundry boy-things out in the back yard.

“Oh, no no no noooooooooooo”, said I. “No way are you gonna take a permanent marker out and use it. That is NOT a good idea. Nope. Not a good one at all.”

Then he looked at me with those eyes. You know the ones…they were so big and wide and earnest. “But mom,” he told me, “I know how to use the marker. I won’t make any messes.”

I looked at him for a long time.

Then I did it. I took the plunge. I told him he could take the marker out and JUST label the bags. I reminded him: no skin, no fabric. Did my best to make it clear that any mess would be a big problem.

“Yes, yes, yes,” he said impatiently, his eyes on the prize. So I handed him the marker and he dashed off.

Several minutes later, he returned with the pen, handed it to me, and walked toward his bedroom. I heard him say something to another child, but it wasn’t clear. That’s when Captain Earthquake walked in from outside. His shirt was off, and he was trying to hide a grin. Something was amiss.

Then he turned around to show me.

Covering his entire back, in letters about 5 inches high (and underlined for good measure) were the words Kick Me.

That was when I yelled. Loudly. And a lot. I told the Captain to put on a shirt and sent them outside so I could yell some more. Then I called Hubby and told him what had happened and we were united in our outrage. Ohhhhhhh I haven’t been that angry in, sheesh, I don’t know. It’s been a long time, I can tell you that. When I went outside to see the boys I lectured some more on the evils of permanent ink on skin eSPEcially after a certain individual PROMISED to be responsible with said ink pen.

See, it wasn’t the ink on the back that drove me up the wall. It was having my trust betrayed so completely. If I hadn’t given him the chance, then I would have felt guilty about it. He’s 9, after all. I usually don’t trust any of the boys further than I can throw them, and I’ve been wondering if perhaps I need to give them more responsibility in life. So I’d given him the chance. And this was the result.

I explained that in detail. Through clenched teeth. I was afraid if I opened my mouth I’d start shouting again.

After consulting some friends and Hubby, I decided to have the Mercenary clean the Captain’s back with some baby wipes. He got about 95% of the ink right off, and this a good half hour after the incident. Thank God for baby wipes.

In addition, the perp had to spend the rest of the day and half of the next one under close parental supervision, since we ‘couldn’t trust him’ anymore. Hubby had a stroke of genius and even limited bike riding to the driveway while the rest of the boys rode up and down our street. Heh heh heh.

At bedtime that night, Hubby had a great talk with the older boys during devotions. The Mercenary asked why people do wrong things, and Hubby explained it’s really because they want to. If someone steals or cheats or lies, it’s because they’ve chosen to do so. This opened the door to discuss the day’s events, and Hubby asked “Why did you draw on your brother’s back?”. Of course, The Mercenary didn’t know how to answer, so Hubby gently said, “It was because you wanted to. You knew Mama told you not to write on anything but those bags, but you wanted to write on your brother so you did.”

I wasn’t there for the conversation, but when Hubby told me about it later, he said that it really seemed to get the boys’ attention and that they looked like they were thinking serious thoughts about choices and obeying.

If nothing else, I doubt they want to see me get that upset again for a looooooong time. One can hope, anyway.