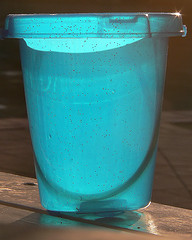 On Saturday The Manager(age 3) coughed so hard he gagged and threw up on 2 separate occasions. Small town life means no doctors on the weekend unless we go to the ER, so we decided to just survive till Monday and then call for the appt. Meanwhile, we tried to keep him from running around too much and coughing more. (Hubby had learned this the hard way after taking them outside for some fresh air, thus triggering barf session #2.)

Anyhow, Sunday afternoon we were downstairs working on the floor in the new bathroom and the littles were playing nicely. The Mercenary was outside and TechnoBoy up watching tv. The basement is unfinished and since I don’t trust my human destructo-machines, they don’t get to go down without us. Playing there is a treat for them.

We were kind of surprised when the littles went upstairs, and then a little disconcerted when we heard pounding feet above our heads. Sure enough, The Manager shows up a few minutes later coughing and gagging.

I got irked b/c I knew that if he threw up then we’d have to do the cleaning, and I am NOT fond of that job. I thought about it, then the answer came to me.

I very sweetly called TechnoBoy to the stairs and asked him if he’d gotten the boys all riled up and running like that. He denied it. I didn’t believe him b/c he has a GIFT for stirring up children. Further detailed questioning revealed that he had perhaps just pretended to be scary and said “rarr” at them.

But he (insert picture of big innocent eyes here) hadn’t chased them or run after them at all.

I said (still sweetly), “Well you did get them riled up and now The Manager is coughing and he may throw up. So here. I want you to take this bucket and follow him around and if he starts to throw up you catch it in the bucket.”

I managed to keep a straight face for the whole thing. He looked at me in disbelief, and I just stood there holding out the bucket. After a moment he came downstairs and took the bucket and I went back to help Hubby with the floor.

Hubby grinned and said “personal responsibility stinks, doesn’t it?” After The Manager calmed down I released TechnoBoy from bucket duty and let him go back to the tv.

It’s moments like that that make parenting soooo worthwhile.

You know what? There hasn’t been any problems with TechnoBoy riling up his brothers since then.