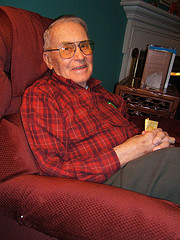 I just spent several days with my grandfather and his wife. Her name’s Anne. She’s my grandmother by marriage, so I’ve always called her by her first name. No disrespect has ever been intended…it’s just that I remember my biological grandma, and Anne has just always been Anne to me.

I didn’t meet Grandpa or Anne until I was almost 16 years old. They live in California, so establishing a relationship over that distance has been more than tricky. I’ve tried to include them in my life when I could, but to be honest I haven’t worked very hard at it. We pay closest attention to the things and people right in front of us, don’t we?

Grandpa was in the Air Force, and retired as a Lieutenant Colonel. I’m not tremendously familiar with military rankings, but I gather he was pretty high up. He worked out of the Pentagon, flew massive planes in wartime, has been all over the planet for both his military and civilian careers. In short, he’s been a commanding figure in his lifetime. He’s the epitome of the “Type A” personality, with some sweetness thrown in for good measure. Anne, on the other hand, is the classic “Type B”. She’s so relaxed and laid back that it sometimes drives Grandpa crazy. They’re a total stitch to watch in action.

I remember visiting them in 1991; one evening she arranged a picnic for us. He fussed over whether or not she’d packed certain things for the picnic, and then got after her a little bit when we arrived at the location only to discover that she’d missed an unimportant detail. Ahh, but I did laugh when we also discovered that a more important detail had been missed by the Lt. Colonel himself. Anne pointed it out so sweetly with that wonderful soft drawl. I wish I could remember the details of that incident more clearly….all I remember is laughing and thinking that they were pretty evenly matched after all.

They’ve been married for 52 years as of the writing of this post, and sadly time has not been kind to Grandpa. He’s struggling with Alzheimer’s and Macular Degeneration as well as Parkinson’s, and a man who once had command over so many men and machines now has to be watched as closely as any young child might be. The difference is, he’s not a child…and he knows it.

I was standing with him outside a restaurant the other day when he looked up at a jet flying overhead and commented, “That’s where I belong.”

It has to be frustrating, knowing that you’ve lost so much independence. And depressing as well. I can see how easy it is for Alzheimer’s patients to withdraw into a shell and just wither away to nothing. The burden is on the caregiver to stay cheerful and patient in all circumstances. Anne carries that burden with a grace that is inspiring.

Even though they live in the desert, and temperatures topped 100 degrees the whole time I was there, Grandpa was cold. Whenever the thought occurred to him, he would shuffle down the hall and turn off the air conditioning. On more than one occasion he even turned on the heat. I laughed at their Thermostat Wars.

It’s funny for a few days, but that same trick over and over for the whole summer gets old fast. The thing with Alzheimer’s patients is you can’t get all impatient and yell at them. Even when you want to. You have to answer questions – the SAME questions – over and over and over.

In order to get back home, I rented a car and drove myself a few hours to the airport. Grandpa was pretty nervous about me going all that way on my own in potentially heavy traffic and started worrying about it 2 nights before I was scheduled to leave. Over and over and over, we had to explain to him what the plan was, reassure that Anne had given me good directions, promise that I’d call and keep him updated as to my progress, and remind him that I’m a big girl and I could do it. It didn’t bother me to have to repeat that process so often, even when I’d just done it 5 minutes ago.

I think it would be a lot harder though, if I was living with him full time. That would truly be a test of my character.

Which brings me back to Anne. She’s doing it. She’s passing that test. She answers the questions and readjusts the thermostat and fixes his food and includes him in daily tasks or conversations and urges him to stay connected and living. Day in, day out, hour after hour, minute after minute.

There may come a time when Grandpa needs to move to assisted living; I trust Anne to make the best decisions possible for both of them as circumstances occur. Either way, she’s one of my heroes.

And I love her very much.