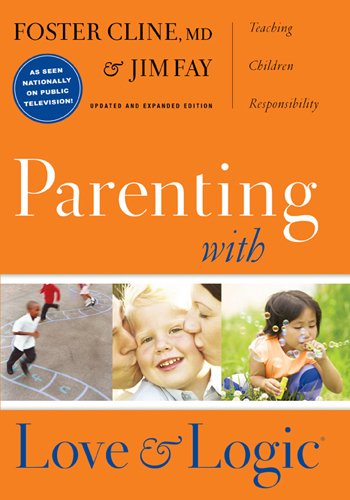 Love and Logic – A general overview of my thoughts on this parenting approach.

Okay, so I’ve mentioned the Love and Logic books in other posts, but I’ve never really sat down and discussed the method here on the blog.I’ll start by telling you that I’ve read several of the books, and have found some more useful than others. There’s no question that the original book is helpful; however I found the one aimed for young children to be the best and most useful for my particular situation. The reason is that the book aimed at older children relies on support and help from outside the family, often from the schools. Since the boys are at home with me all day, I can’t necessarily use that very well.

Here’s an example: The author states that having a bedtime battle every night is pointless. Instead, what he did was say to his children (when he thought they were at an appropriate age) “All right, it’s time for bed now. Your mother and I are going to sleep, and we don’t want to hear from you again until morning.” When the child chose to stay up to all hours of the night, the parents didn’t say anything. The rubber hit the road the next morning when they woke him and sent him off to school for the day (with great big cheerful smiles on their faces). I think the little boy’s name was Charlie, and as I recall, he didn’t make it through dinner before he zonked out.See, that’s the key. Get the child into a situation where his mistakes cause him a little bit of discomfort, and do it the younger the better. It’s much less painful for a third grader to yawn through the day than for a college student to miss an exam because he hasn’t learned how to manage his sleep time responsibly.

The Bucket Story is another great example of Love and Logic. By putting TechnoBoy in charge of dealing with the situation, I didn’t have to scold or nag at him, and he went on to (for that day at least) manage his own behavior better.

Sometimes parents do all the work: nagging and cajoling, bribing and pleading, to get the children to behave appropriately. That’s really not fair. The parent already knows how to act, and is fully aware of the short- and long-term consequences of bad behavior. A child who is allowed to be whiny and demanding at age 2 isn’t going to be a tremendously pleasant teen and could even lose friendships or job opportunities as a result.

Love and Logic relies heavily on your approach to the child’s misbehavior or poor judgement. By changing your responses to inappropriate choices from impatience/anger to loving sympathy, you can help your kids learn responsibility at younger ages. It’s not the easiest thing to do. At least it isn’t for me. Yes, that’s written in present tense. My tendency is to scold and lecture and to give too many chances before I’m up doing something to get the response I’m looking for. I have to take time and think carefully about what a Love and Logic response should be in any given situation.

That said, it is getting easier. The past several weeks I’ve been doing very well with it. I think there’s a momentum that you build up as well. Once I got in the groove it’s been easier to stay there. I still catch myself scolding, but I’m definitely doing it less than I was.

I was really struck one day earlier this year when I realized that the big phrase I heard from the boys all the time was “I don’t like that”. Guess where they were getting it? Me. I’ve caught the phrase coming out of my mouth again recently, so that’s an area I will continue to work on.

Love and Logic is only a portion of my overall discipline and parenting strategy, but it definitely is one of the foundational components. When I do it correctly the smile the children see on my face is genuine.

Earnest Parenting: help for parents who want to use Love and Logic techniques.

FTC Disclosure: the link above is an affiliate link. All opinions are my own.