First Day of the New School Year: We Survived 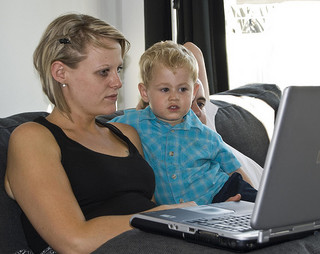 Well.  I knew the boys were anxious about starting school again, but I had no idea how anxious.

It all started with getting them out of bed about an hour earlier than they are accustomed.  Turns out a certain brilliant (ahem) individual made a doctor’s appointment for Captain Earthquake at 7:45 am.  Oh.  Did I mention that the doc’s office is a 45 minute drive away?  Yeah.  Not so brilliant.  Hubby graciously agreed to take the Captain to the appointment, and then I followed in later with the crew to pick him up.  It went quite well overall; the boys always love going to Dad’s work and the Captain was especially pleased with getting time alone.  He has this sneaky little smile that plays around his lips when he’s really happy.  I saw it this morning.

We didn’t get back home from the city until almost 10:30.  I wanted to dive right into lessons.  The older boys didn’t share my enthusiasm but they got themselves around and we began with math.  We’re using the same program we have in the past, but 4th grade format is quite different from the past 3 years.  There was a lot of reading to do so we worked on it in short sections.  They kept shaking their heads and saying they didn’t remember anything, then when they actually tried a problem the answer came pretty easily.

Unfortunately, there were some tears, lots of frowning and complaining and oh, the fighting.  Phew.  Each pair of boys was at each other’s throat, even into the afternoon.  The Mercenary was actually trembling during math.  Poor things.

I kept telling them that they were fine and that this was easy and that we can manage.  I drew out a schedule for the older boys so they had a visual on what the weekly schedule would look like.  That seemed to help, especially when they realized that 4 different subjects are actually only done every other day.  The younger boys, being officially in kindergarten this year worked on a math lesson with pattern blocks, and then we talked about a couple of letters in the alphabet.  They also joined in the magnets play-ahhh, I mean activity this afternoon.

By the end of the lessons, everyone seemed more relieved.  I was getting smiles and cooperation.  We’re starting Latin this year so the older boys and I watched the video lesson together and then practiced our words briefly.  They had a great time trying out the new terms on Hubby tonight.  (We learned that Deus means God, so when he prayed at bedtime The Mercenary said “Dear Deus” and then giggled hysterically along with TechnoBoy.)

I sent them out to play and the squabbling continued for quite a while.  A migraine hit, bad enough that I had to lay down.  For some reason the fighting stopped at that point and everyone played nicely and let me snooze the rest of the afternoon.  Hubby brought home dinner and took them to soccer and then for ice cream (I told you he was the best man on the planet).  When they got home it was time for story reading and bed.

So.  We survived it.  Tomorrow we start history and grammar for the first time; history is just a continuation of last year and it’s a new grammar program.  I think they’ll do great with it because there’s a workbook for them to write in.  Last year they had to copy the sentences out and that got overwhelming.  There’s copywork and dictation included, but overall the presentation is less intense.

Here’s hoping for more smiles and giggles tomorrow.  Heaven knows they deserve it.