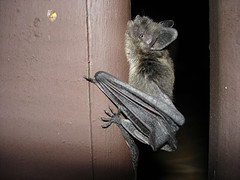 Having a bat in the house can be stressful.

I haven’t shared a funny in several days, and Hubby reminded me of this story so I thought I’d post it.

I fell asleep one evening on the couch while Hubby was working in what was the office at the time. TechnoBoy and The Mercenary were fast asleep in their own beds. I was about 7 months pregnant with Captain Earthquake and The Manager and had laid down to watch TV for a bit. I woke up, and above me circling the room was….a bat. I believe my first response was to call “Honeeeeyyyy” in a quavering voice. The bat flew off in the direction of our bedroom so I headed towards the office to hiss that a bat was in the house and Hubby was required to get it out. Soon. I closed all the doors in the area to prevent it from coming down and waking the boys, and turned on all the lights for good measure. I know next to nothing about bats, but I was figuring it wouldn’t like the bright lights.

Hubby hurried to our bedroom doorway and flicked on the light. Sure enough, the bat was on the curtains and started flying madly around the room. Hubby asked for a broom, which I fetched for him. Then he said a bucket would be handy, so I rushed out to the garage to get that as well.

To get there, I had to walk down a short hall to a room we call the breezeway. It’s really more of a back entry from the garage or a mudroom, but the name stuck so that’s what we call it. The floor was unfinished plywood. On my way back in from the garage with the bucket, I tripped over the threshold and crashed to the floor.

Now, I was 7 months pregnant. With twins. Crashing to the floor about 15 feet from Hubby, who was waving the broom at the bat circling the room. It wasn’t a exactly quiet landing. I lay there for a second and said weakly (to no one in particular) “owww”.

When I didn’t hear anyone coming to my rescue, I got up and limped to the bedroom to hand Hubby the bucket. He held up the broom, the bat flew into it and fell to the floor stunned. So the bat went into the bucket to be released outdoors. I limped to the couch and lay down again. Hubby still had no clue that I’d fallen.

After he came inside after releasing the bat I told him what had happened. He was still excited about the big bat hunt, so I didn’t get much sympathy. I figured that I deserved a lot of pampering and tlc after my traumatic experience. But nooooooo. We had to look up bat habits, and try to figure out how and why the bat got in the house in the first place. It was all about the bat.

So now I tell that story on Hubby anytime a friend says they had a bat in the house. I figure if he’s not going to feel sorry for a hugely pregnant woman crashing to the hard floor (where I could have gotten nasty splinters, by the way) then perhaps someone else will, and give me the sympathy that I’ve been lacking all these years.