Facing a Parting, The Update 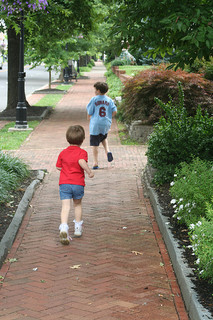 The only predictable thing about kids is they’re unpredictable.

We had a kids’ craft event at church yesterday afternoon, and my friend D was there.  You know, the one who’s leaving.  It was super hard watching her talk to a few of the other ladies, saying some goodbyes and crying a bit in the process.  It was clear she hadn’t told her children yet, and I’d made sure not to say anything to mine, just in case.  I did manage to distract her eldest son away once and I don’t think he saw the tears.

As soon as we got home we called a family meeting and sat down to tell the boys the bad news. I wanted them to have time to think about it and ask questions well before bedtime.  They were not pleased, but we didn’t have the crying or sadness that I had anticipated.  We had to answer some rather pointed questions, but then they were all “Okay.  Can I go play outside now?”

Fast forward to this morning.  Everyone was calm.  I got choked up a bit during singing time (not the best thing to do when you’re holding the microphone so I got it under control).  The pastor’s sermon couldn’t have been more timely; he talked about how God sometimes puts calls on our lives that don’t make sense to us, let alone to others.  But that’s okay.  God doesn’t need to explain Himself to anyone, and He is always right.   Pastor talked about how Abraham answered God’s call to leave his homeland, even though he didn’t know where he was going to end up.

At the end of the service, Pastor called up D and her hubby so we could gather around them  and pray.  Then since Hubby and I have been so close to them, Pastor invited us to stand right next to them.  That’s when D and I started hugging.  And sobbing.

I’ve known this day was coming for a long time.  See, D and her husband were deeply hurt in the church split last year.  It took a long time for healing to even begin.  But it has, and now they’re both sure that God is asking them to step away from the church family, even though they’re not sure what to do next.

Hubby told me a long time ago that they’d leave eventually.  D and I have talked about it more than once, and her hubby talked to mine.  So this isn’t a surprise.  I don’t think anyone in the church family was surprised by the decision; anyone I spoke with about it was both sorry to see them go but so hopeful that they find a wonderful new church to attend.   There’s even hope that someday they’ll return to us; maybe this is a test of their obedience the way Abraham was tested with Isaac.  That door is still open.

I don’t feel like a wrong choice has been made.  I trust that D and her husband are on the right path.  At the same time, I feel so deeply sad today.  And I don’t completely know why.  We’re still going to see each other, for date nights and cooking days, and our accountability meetings.  I haven’t lost my friend.

D and I were pregnancy buddies (me for the younger boys, she for her middle child).  I didn’t have that blessing for the first pregnancy, so it was a very special thing.  Her son was born just 2 weeks after The Manager and Captain Earthquake came along.  She and her husband signed on to help plant the church shortly after we did.  I think they were the last people besides us that were in the founding group.   We’ve been together through so much…crazy people and events….celebrations and partings….laughter and tears….what can I say?  She is my friend.

There have been many many families that have come into my life via this church who have later moved on for one reason or another.  Then we had the big split last year, with half the congregation choosing to leave.  That hurt, but I just dealt with it and kept moving.  This time, it just really hurts.

So.  I’m planning to cry about it as long as I want, then when I’m all done I’ll take a deep breath and keep on  rolling.

As for the boys, I caught D’s oldest son giving TechnoBoy a goodbye hug after service.  It was adorable: one of those awkward man-hugs that they really meant but were embarrassed about at the same time.  The Mercenary didn’t do any hugging, just said loudly “Well, I’ll see you in a few months”.  Nut.  We’ll see them in probably a couple of weeks.