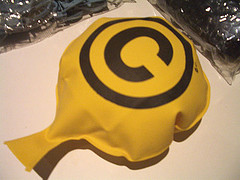 Hulloooo Internets! Have you been wondering where I was? Not to worry, I’m here working hard behind the scenes. Want to know a secret? There are some exciting things on the horizon for Earnest Parenting. I’m working on a new blog design! It’ll be a good 4 weeks before things are finalized, but I can assure you that it’ll be a dramatic change. Don’t tell anyone else, okay? We’ll just keep this between us. 😉

Okay so we’re all in church yesterday and after the singing time the pastor has been having the kids come sit on the floor in front for a mini-sermon before they’re dismissed to their own classes. This is a new development in the life of the church; up until January of this year we met in the town theater and there was no way we were lettin’ the kids sit on that sticky floor. Eww.

Where was I? Oh yeah. The kids were assembled and waiting at the front of the church. Yesterday Pastor had his 17 year old son stand up to talk to the kids. Tyler is well over 6 feet tall, and he was up on the step towering above the kids (who were listening pretty well). He was speaking to them about integrity and had just given them a great definition of what that means when I realized that someone was trying to get the copier unstuck and having no success. So I walked out to help her and missed what came next.

Which is probably a good thing. Hubby told me about it later…

Tyler was talking along, really on a roll with the whole integrity theme, telling the kids how to live a life of integrity when a small voice suddenly piped up with:

“I have a whoopee cushion!”

I don’t have to tell you it was one of my kids, do I? Yep. It was. Captain Earthquake had used his very own dollars to purchase one on Friday and let me tell you, joy abounded all weekend. Along with some pretty loud, ummm, whoopee cushion noises.

Amazingly I didn’t hear it in use today; perhaps he left it in the car on the way home from church yesterday.

Thank God we didn’t let him bring that in during the service.

Earnest Parenting: help for parents of children who can be embarrassing.