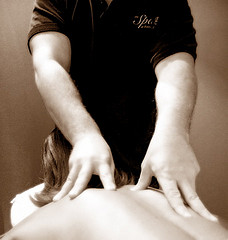 I have been functioning lately with some muscles in my neck and shoulders that are pretty knotted. It got to the point where I was taking stuff for the pain daily, sometimes more. Which is not good. While the boys were gone a few weeks ago I took advantage of the opportunity to get a massage in hopes of working some of the knots out.

Stephanie, the massage therapist, had this to say about me “Your shoulder is messed. Up.” She gave me a new cream to try and sent me on my way. The next day I had a migraine that was just awful. I think it was triggered by the massage, and specifically I hope it was a sign of the muscles starting to relax.

The next time I saw Stephanie she inquired after my shoulder and I told her about the migraine and how severe it had gotten. She asked how it was doing then and I responded that things were a lot better, but I’m never really pain free. Things were uncomfortable but tolerable.

Hmmm. We all carry pain in one form or another, don’t we? Physical, emotional, spiritual…so many have pain of some kind.

I’ve been thinking about how we as parents deal with pain, and how that affects our families. Using my knotted shoulder as an example, I pulled the following principals from the experience.

Pain is something we can carry and even become resigned to or learn to ignore long-term. It’s safe to say that I’ve had stiff and/or painful muscles in my neck since high school. I’ve tried different things over the years with limited success. There is more I could do to work on the problem; it’s very easy to just rely on the ibuprofin and keep going rather than deal with the source of the issue.

When the pain becomes so severe that it interferes with living, we’re more likely to take action. Yeah, I know. This is a rather obvious statement. It’s true though, even for emotional pain. While there are individuals walking this planet who work through their issues consistently, for many of us it’s easier to just set it aside or stuff the emotions down deep, put on a mask and keep going. Unfortunately, problems don’t go away when ignored. More often, they fester and grow.

Pain inhibits our activities, sometimes before we realize it. With the physical pain, I don’t turn my head as far to either side as I’d like. Playing rough and wrestling with the boys is something I’ve been avoiding more lately, because I’m more fragile.

The adaptations we make in life to work around the pain can cause more difficulty for us. I’ve not been exercising the way I should. This means I am not irritating the painful areas, but I’m not strengthening them either. Rather, I’ve put myself into a holding pattern.

Removing the cause of long-term pain can result in more severe pain temporarily. The migraine after massage episode is proof of that. A second massage a week later resulted in more pain the next day; it wasn’t nearly as severe though.

How we handle pain is apparent to our children and sets the stage for their own methods. We can set good examples (handling difficult or painful circumstances with honesty and grace) or bad (playing the victim or wallowing in defeat). The choice is up to each of us.