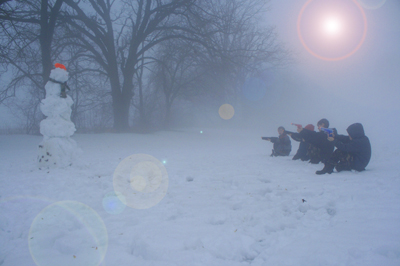 I asked last year for opinions and practices on having guns in the home. If you haven’t seen that one, do read it; the comments are fantastic.

I grew up in a home that was very anti-hunting and somewhat anti-gun. Definitely anti-violence, that’s for sure. Owning a gun ourselves or letting the boys even approach one has been something that I wouldn’t have predicted ten years ago when we first had children.

In this day and age, I have come to believe that it would be irresponsible to not train the boys in gun use. Boys who understand and respect guns are less likely to misuse them. I like the idea of teaching them definitively that guns are not toys, and we have even informed them that we’ll likely remove all of the toy guns they currently own if/when real ones are acquired.

Secondly, it’s a dangerous world we live in. Whether there are foreign or domestic attackers nearby, being armed could conceivably be a lifesaver. And third, survival skills are critical. While I would not like to go hunting myself, I know families who depend on it for food ; it’s easy to imagine a scenario in which our own family would have that need. I told the boys in no uncertain terms that if they shoot at a live creature they jolly well better be planning to eat it.

So. For all those reasons, we’ve decided that the boys are old enough to start learning about weapons and how to handle them. Each boy got an Air Soft bb gun for Christmas, which was very popular. Hubby has training in gun safety, so he’s been teaching the boys what to do: how to hold the guns, how to load and unload, how to store them. All that important gun stuff. I have declined training until better weather thankyouverymuch. It’s too cold outside!

Things have gone extremely well. The initial novelty has worn off, and the boys have been very careful with their new tools. And trust me, they’re watched very closely. The older boys have been anxious to lose some of the supervision, but we’re pretty firm in our resolve to take it slow.

We had a big snowstorm here last week, and Hubby and the boys went out to exult in the snowiness of it all (I stayed inside – see above note about temperatures) and they built the tallest snowman ever constructed here at Earnest Parenting. And then they…well, you could see the results above.

And mom, if you’re reading this, I apologize for disregarding my upbringing.

My excuse is the testosterone in which I drown daily.

Earnest Parenting: help for parents who drown in testosterone.