How a Day of Skiing Taught Some Trust 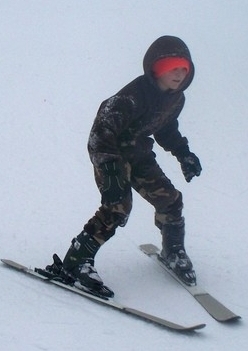 People who’ve known me a long time will be shocked at this next statement.

I even skied with them on the slopes. We were invited by our neighbors to join a their school field trip (they teach at a private school just around the corner from our neighborhood). I am not an outside person in the winter, but I recently became the proud owner of a pair of snowpants, and it turns out you can stay pretty warm with them. 🙂 Ooops, I digress.

This was the first time on skis for all of the boys, and my second experience. (My first trip was in college, and I’ll give you the short version: it didn’t go well but the hot chocolate in the lodge was delicious!) So. The first thing every child had to do was go through ski school. Oh wait! No, the first thing we had to do was wait in looooong lines and get fitted for boots and skis. The Manager in particular had difficulty believing me that everything would work out. Both he and Captain Earthquake heard me say, “Trust Mama” about forty bazillion times. , then falling down. There was much frustration and crying, let me tell you. And many more “Trust Mama”s.

As soon as step one of the lessons was complete, the Captain angrily plunked himself down and started eating snow. I followed The Manager up the hill for step two and kept an eye on Angry Boy. Several kids and adults approached him to see if he was okay, but he just kept sitting there eating snow. I did suggest strongly that snow consumption was a really bad choice at this juncture, then focused on keeping up with the boy who was actually participating in the event. TechnoBoy and The Mercenary, by the way, went through ski school with flying colors and were off to try the tow rope very quickly.
The Manager’s smile upon mastering step two of ski school was big. Big enough to convince the Captain to try again. There was more frustration-and the equivalent of 6 year olds cursing-along with another forty bajillion “Trust Mama”s from my end. But they did it! Both boys made it through.

There aren’t words to describe how epic the battle was for each boy. Deciding to trust me and not quit the challenge was no small feat. Shortly after we finished ski school it was time for lunch. The Captain informed me that he’d be spending the afternoon in the lodge but later changed his mind. Our next challenge was learning the tow rope. It took ten or twelve tries, but they managed that as well and soon had mastered the bunny hill.

Then I mastered the bunny hill, which was actually a bit scary but all ended well. Meanwhile, the older boys had moved up to the next hill and were pestering me to join them. I finally decided to give it a try and who should join me but the younger ones.

There were more scary moments with boys getting off the tow rope too early and not being able to climb the hill so I had to try and get my skis off and climb down and push them up then get everyone’s skis back on and look down the verrry long hill. Then I had to ski down said hill, which was even scarier. But I did it. Twice. Everyone else went round a few more times, then it was time to leave. I thought you might like to see the hill we skied. This is the medium bunny hill, where the older boys spent most of the day. The Mercenary is in front, with Captain Earthquake following behind. See those two dots at the top of the hill? Yeah, that’s TechnoBoy on the left and The Manager on the right. Now you know why I was a bit nervous most of the day. My babies looked so tiny!

As we were heading back to the lodge The Manager was next to me and I asked if he’d had a fun day. With a giant smile, he nodded. Then I asked if he remembered what I’d told him all morning and he said, “Trust the Mama”.

Earnest Parenting: help for parents who want their children to trust.